One Year Blogiversary Book Give Away!

This giveaway is now closed.
Winners will be announced 1/12/11


As you have probably gathered by now from the incessant amount of crazy I’ve insisted on pouring out today – today is my blog’s one year anniversary.

A year ago today, I decided to start writing reviews of the books I was reading. I never expected anything major to come of it, I just enjoyed writing my thoughts on what I was reading and sending them out into the ether. I never could have anticipated the incredible year I’ve had as a result of it.

I’ve met some very awesome people – most notable mentions must go to Elle from The Book Memoirs who is straight up fabulous, and the amazing Angie from Angieville who never fails in persuading me to read something. I’ve had opportunities to read some amazing books I wouldn’t have otherwise seen, and as a result been introduced to some awesome authors, and been in contact with some of my favourite authors, who haven’t seemed to mind my crazy fan girl squeeing at how awesome they are. Particular mentions go to – Gail Carriger, Ali McNamara, Deanna Raybourn, Cassandra Clare and the wonderful Sarah Rees Brennan.

So, after that little heartfelt splurge, I think a giveaway is in order.

I have for three lucky people, three fabulous ARCS.

One copy of ‘Fracture’ by Megan Miranda to give away, and two copies of ‘The Weight of Water’ by Sarah Crossan (full details of the books will be given below.)

If you would like to be in with a chance to win, all you need to do is tell me what your favourite book from this year is and why. Leave a comment in the comments section below, and if you have a preference over which book  you’d like to receive let me know that as well. If you’re a follower of my blog that is always a bonus, but not a necessity.

Winners will be drawn at random out of a hat and then notified.

The give away will be open from when this post goes live on 28th November until Midnight UK time on 1st December 2011.
The giveaway is open internationally. Fracture by Megan Miranda
Release date: 5th January 2012
Eleven minutes passed before Delaney Maxwell was pulled from the icy waters of a Maine lake by her best friend Decker Phillips. By then her heart had stopped beating. Her brain had stopped working. She was dead. And yet she somehow defied medical precedent to come back seemingly fine -despite the scans that showed significant brain damage. Everyone wants Delaney to be all right, but she knows she's far from normal. Pulled by strange sensations she can't control or explain, Delaney finds herself drawn to the dying. Is her altered brain now predicting death, or causing it?
Then Delaney meets Troy Varga, who recently emerged from a coma with similar abilities. At first she's reassured to find someone who understands the strangeness of her new existence, but Delaney soon discovers that Troy's motives aren't quite what she thought. Is their gift a miracle, a freak of nature-or something much more frightening? 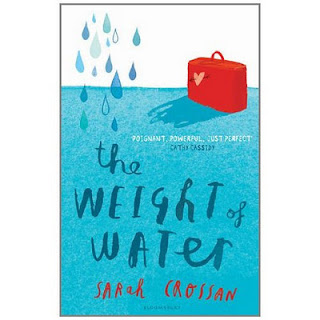 Armed with a suitcase and an old laundry bag filled with clothes, Kasienka and her mother leave Poland and head for the UK to find her father. Life is lonely for Kasienka. At home her mother's heart is breaking and at school Kasienka finds it impossible to make new friends. While the search continues, Kasienka is kept afloat by William, a boy she meets at the local pool who understands what it means to lose someone and who swims with Kasienka towards her new life.