Review: Shadows on the Moon by Zoe Marriott 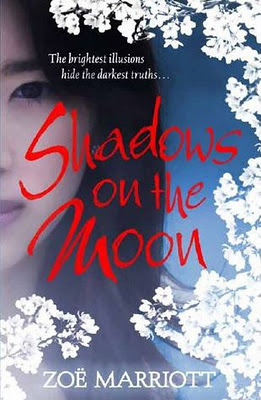 A powerful tale of magic, love and revenge with a strong female lead set in fairy-tale Japan; this is "Cinderella" meets "Memoirs of a Geisha". Trained in the magical art of shadow-weaving, sixteen-year-old Suzume is able to recreate herself in any form - a fabulous gift for a girl desperate to escape her past. But who is she really? Is she a girl of noble birth living under the tyranny of her mother's new husband, Lord Terayama, or a lowly drudge scraping a living in the ashes of Terayama's kitchens, or Yue, the most beautiful courtesan in the Moonlit Lands? Whatever her true identity, Suzume is destined to capture the heart of a prince - and determined to use his power to destroy Terayama. And nothing will stop her, not even love.

I read and reviewed Zoe Marriott’s debut novel ‘The Swan Kingdom’ a few days ago, and loved it. It had a few flaws, but as I said then, if that was her debut novel, as she progressed and wrote more novels her writing was going to be epic. And it so is.

‘Shadows on the Moon’ is Marriott’s third novel and a retelling of the fairy tale ‘Cinderella’ – however it is such a break away from the original tale that it has become an entirely fresh, new and unique tale in its own right. Spreading over months with Suzume taking on many different personalities, it has an epic quality that I haven’t really witnessed before in a fairy-tale retelling.

The tale is set in feudal Japan, but with a masterful blend of history and fantasy woven together. I really enjoyed the whole fairy-tale-esque feel to it. It had the same qualities of all those fairy tales I loved as a child but with the added bonus that the main character had an edge and a passion that meant she wasn't about to lie down and wait for her prince to rescue her.  In fact, she will actively push her prince away if it looks like he’s going to get in the way of her main goal.

The fairy tale setting gives the novel plenty of charm, with the writing style complimenting it with its beautiful lyricism and poetic moments. Marriott is a truly brilliant writer who is able to evoke so many feelings and images, and wrap them around you until you are completely immersed in Suzume’s world.
Despite the tragedies she is forced to endure, I found myself hating every moment I had to put the book down, wanting to stay in Suzume’s world for as long as possible.

Marriott also explores the idea of the unreliable narrator in Suzume. She’s young, innocent and forced to grow up too quickly through the horrors she’s witnessed and the lack of support or love from any family members. Suzume believes she has done terrible things – she’s suffering from not only PTSD but survivor’s guilt as well, and she acts impulsively to try and ease her pain. However we only ever have her word on events, so it’s fascinating for events to twist and turn on their heads as she realizes her assumptions have not always been correct.

Marriott also explores the idea of Suzume taking her internal pain and making it external, through inflicting pain on herself via cutting. It’s never glorified, but it is heartbreakingly realistic, and Marriott does an incredible job of keeping Suzume on the fine line between strong and weak, hard and determined, yet soft and broken, and inflicting pain on herself versus killing herself. She says it herself, she never meant to do anything wrong, she was just trying to have some semblance of control on her life.
It’s a very delicate subject expertly handled.

Shadows on the Moon is incredible for its handling of some of the ugliest human emotions in an incredibly beautiful way. I found the relationship between Suzume and her mother to be particularly fascinating as the mother’s cruelty is revealed to the reader as it is to Suzume – the vindictive resentment and jealousy – and so the reader is effected with the same impact that Suzume herself is as she realizes the extent of her mother’s betrayal.

With all the self destruction in the novel, Marriott lures the reader into thinking that this is the only ending that Suzume is destined to have, but at the last moment gives her a final chance for salvation – after all, what fairy tale is complete without a happy ending?

Marriott has outdone herself with this latest novel, a truly breath taking work of fiction that takes some of the harder realities of the human spectrum and tackles them with grace and finesse, making them beautiful in a whole new way.

Definitely an author to watch out for. Her next book ‘Frostfire’ is due for release on 5th July 2012.