Due to personal circumstances out of my control I ended up taking an impromptu hiatus (as you could probably tell from the lack of updates.)
However now I am back! With a new year and lots of new books, so we'll be back to regular scheduling again.

In the mean time there is a truly massive pile of awesome books coming out this month which I cannot wait to get my hands on... 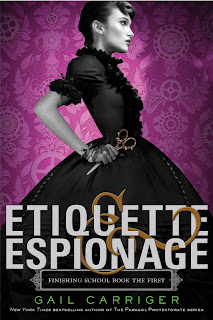 
It's one thing to learn to curtsy properly. It's quite another to learn to curtsy and throw a knife at the same time. Welcome to finishing school.
Sophronia is a great trial to her poor mother. Sophronia is more interested in dismantling clocks and climbing trees than proper manners-and the family can only hope that company never sees her atrocious curtsy. Mrs. Temminnick is desperate for her daughter to become a proper lady. So she enrolls Sophronia in Mademoiselle Geraldine's Finishing Academy for Young Ladies of Quality.
But Sophronia soon realizes the school is not quite what her mother might have hoped. At Mademoiselle Geraldine's young ladies learn to finish . . . everything. Certainly, they learn the fine arts of dance, dress, and etiquette, but they also learn to deal out death, diversion, and espionage - in the politest possible ways, of course. Sophronia and her friends are in for a rousing first year's education.

There are some authors who I love so much I don't even look at the blurb or anything when I see they have a new book coming, I just pre-order it then and there because I know it's going to be awesome.
And Gail Carriger is one of those authors! This is the start of her new 'Finishing School' series and it's going to be awesome. That blurb! That title! That cover! Be still my heart!

5th - City of a Thousand Dolls by Miriam Forster 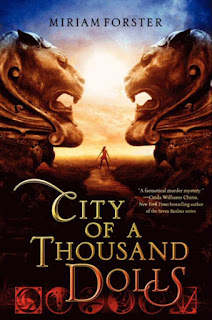 The girl with no past, and no future, may be the only one who can save their lives. Nisha was abandoned at the gates of the City of a Thousand Dolls when she was just a child. Now sixteen, she lives on the grounds of the remote estate, where orphan girls apprentice as musicians, healers, courtesans, and, if the rumors are true, assassins. Only when she begins a forbidden flirtation with the city s handsome young courier does she let herself imagine a life outside the walls. Until one by one, girls around her start to die.

Ever since Miriam first announced on twitter that her book was being published I have been desperate to get me hands on it. It just sounds so awesome and I am in awe, and this is one of my most anticipated reads of the year. Now I just have to make my patience last until I can read it! 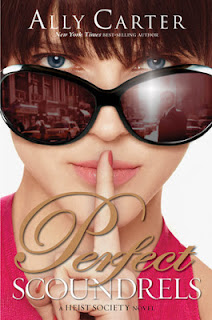 7th - Perfect Scoundrels by Ally Carter
Katarina Bishop and W.W. Hale the Fifth were born to lead very different lives - her family are criminal masterminds, while he comes from an apparently perfect dynasty. But both families know how to stay under the radar while getting - or stealing - whatever they want.
When Hale unexpectedly inherits his grandmother's billion-dollar corporation, he quickly learns that there's no place for Kat and their old heists in his new role. But Kat won't let him go that easily, especially after she is tipped off about an elaborate con to steal the company's fortune. Instead of being the heir, this time Hale might be the mark.
Kat is prepared to do the impossible, but first she has to decide. Is she willing to save her boyfriend's company if it means losing the boy?

I adore the Heist Society series, and so with this third book so tantalisingly in reach now I am going out of my mind to see where Hale and Kat end up next.
If you haven't discovered this series yet, start with the first book 'Heist Society' - they are a fantastically witty, fast paced and brilliantly written series. 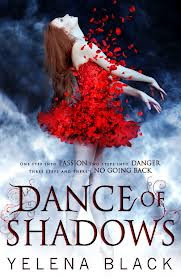 12th -Dance of Shadows by Yelena Black
Dancing with someone is an act of trust. Elegant and intimate; you're close enough to kiss, close enough to feel your partner's heartbeat. But for Vanessa, dance is deadly - and she must be very careful who she trusts...


Vanessa Adler attends an elite ballet school - the same one her older sister, Margaret, attended before she disappeared. Vanessa feels she can never live up to her sister's shining reputation. But Vanessa, with her glorious red hair and fair skin, has a kind of power when she dances - she loses herself in the music, breathes different air, and the world around her turns to flames . . . Soon she attracts the attention of three men: gorgeous Zep, mysterious Justin, and the great, enigmatic choreographer Josef Zhalkovsky. When Josef asks Vanessa to dance the lead in the Firebird, she has little idea of the danger that lies ahead - and the burning forces about to be unleashed...


Oh this book is creepy! It's fantastic but there is this horrible sense of terror and dread that permeates the entire book and leaves you terrified!
It's got a fantastic premise, a beautiful cover and really good writing all in its favour, and a healthy dose of fear just to tip it into the truly brilliant.
Review to come soon. 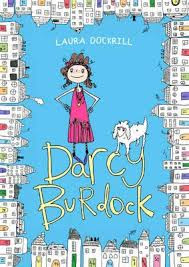 28th - Darcy Burdock by Laura Dockrill
Ten-year-old Darcy Burdock is one of life's noticers. Curious, smart-as-a-whip, funny and fiercely loyal, she sees the extraordinary in the everyday and the wonder in the world around her.


In this first book, we are introduced to her family: Mum, who Darcy loves as much as her favourite fried egg and chips, Dad, who is kind and fair if a bit hopeless, and little siblings Hector and Poppy, who Darcy likes dressing up in ridiculous outfits and having dance-offs with, respectively. Plus there's her non-bleating pet lamb, Lamb-Beth and best friend, Will, to have adventures with.
Darcy learns that turning into an angrosaurus-rex and causing chaos just gets her in trouble, trying to run away from home with a reluctant lamb in tow leads to sore kneebows, it's best not to throw a massive strop just before your surprise birthday party, Hallowe'en is all about spider costumes and having a pumpkin with a wonky eye, and if she's ever in a situation at home or at school where she's not sure what to do, she should write a story around it and the truth will be illuminated by her imagination.

This book is a much lower age range than the ones usually reviewed on here, however it is too damn awesome to not be read.
Laura has created a fantastic heroine in Darcy - she's smart, sassy, incredibly funny and very believable. The book is absolutely brilliant (complete with illustrations!) and I cannot recommend it enough!
Review to come soon!

So those are my excitements for this month - it's stuffed full of awesome! But what books are you looking forward to most?