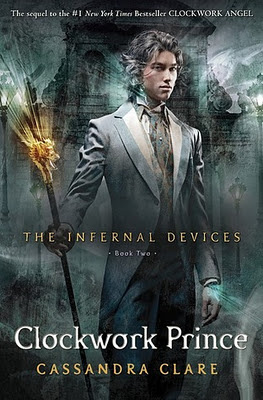 A special thank you to Elle at The Book Memoirs and Ruth at Walker Books for giving permission to review prior to release.

In the magical underworld of Victorian London, Tessa Gray has at last found safety with the Shadowhunters. But that safety proves fleeting when rogue forces in the Clave plot to see her protector, Charlotte, replaced as head of the Institute. If Charlotte loses her position, Tessa will be out on the street and easy prey for the mysterious Magister, who wants to use Tessa's powers for his own dark ends.
With the help of the handsome, self-destructive Will and the fiercely devoted Jem, Tessa discovers that the Magister's war on the Shadowhunters is deeply personal. He blames them for a long-ago tragedy that shattered his life. To unravel the secrets of the past, the trio journeys from mist-shrouded Yorkshire to a manor house that holds untold horrors, from the slums of London to an enchanted ballroom where Tessa discovers that the truth of her parentage is more sinister than she had imagined. When they encounter a clockwork demon bearing a warning for Will, they realize that the Magister himself knows their every move and that one of their own has betrayed them.
Tessa finds her heart drawn more and more to Jem, though her longing for Will, despite his dark moods, continues to unsettle her. But something is changing in Will; the wall he has built around himself is crumbling. Could finding the Magister free Will from his secrets and give Tessa the answers about who she is and what she was born to do?
As their dangerous search for the Magister and the truth leads the friends into peril, Tessa learns that when love and lies are mixed, they can corrupt even the purest heart.

Whilst I adore any of Cassandra Clare’s writing, there is something very special about the Infernal Devices series that is missing from her other books. I don’t know if it’s something about the period, where every look and touch means a hundred fold more than it would in our time, or whether the backdrop of Victorian London provides more of an atmosphere for the Shadowhunters to inhabit, but there was something very special about ‘Clockwork Angel’ and it’s back, multiplied a hundred fold in ‘Clockwork Prince’.

We are back with the characters we grew to know and love in ‘Angel’ only this time we’re treated to more, a deeper understanding behind the faces, and higher stakes for all concerned.
We’re once again on the hunt for the Magister – who truly becomes more terrifying by the book. Clare has created a masterful villain, one who despite his human origins holds more menace and horror than most supernatural terrors. But whilst the hunt provides a backdrop and a motive, the real heart of ‘Clockwork Prince’ lies in the character development, for all concerned but most notably for Tessa, Jem, and particularly Will.

Tessa Gray is one of the most brilliantly written female protagonists around in young adult fiction. Clare established her in Clockwork Angel and has worked hard to improve upon this in Clockwork Prince. She’s kind, loyal, and loves so blindly and passionately it consumes her. But not only that, she can take care of herself, and can see weaknesses and understands that sometimes she does need to ask for help from others. She is the perfect blend of independent, strong, feisty and compassionate that it makes it completely believable that both Jem and Will could – and do – love her.

And Will – oh my what a transformation. The foundation that Clare builds in  ‘Clockwork Angel’ was just the beginning. We get a plethora of backstory, an insight into his mind, his thoughts and his belief system that has shaped him over the last five years of his life. Clare takes an incredibly handsome but for the most part incredibly cruel character and develops him into an incredibly broken yet beautiful character. Whilst I liked him in ‘Clockwork Angel’ I think I finally grew to love him throughout ‘Clockwork Prince’.

Jem on the other hand has gone from one of my favourite fictional boys, to my favourite fictional boy. He’s sweet and caring and shows nothing but compassion and love for those around him – even when they don’t deserve it. However, he’s also shown a darker side, a stronger side that wasn’t as obvious in ‘Clockwork Angel’. Whilst Will burns more obviously, Jem’s is a subtler fire, that flares into life at some unexpected moments, and produces some of Clare’s steamiest writing to date.

One of Clare’s many and fabulous talents includes creating brilliant love triangles with no clear winner. In most fiction these days there is usually a clear winner – a boy that regardless what else happens will inevitably sweep off with the girl. However when faced with the choice between Jem and Will, there is no clear winner – they are both incredibly deserving, brilliant characters in their own right, and it is a tribute to Clare’s skill that I found myself rooting for one on one page, and then a few pages later was completely swept away by the other. I loved watching how the triangle plays out throughout ‘Clockwork Prince’ but I have a feeling that is nowhere near the end of it, and I’m looking forward to seeing how their interactions continue. Just let them still be as steamy as some of the scenes in ‘Clockwork Prince’ and I shall be a happy girl…

“Reparations,” said Jem very suddenly, setting down the pen he was holding.
Will looked at him in puzzlement. “Is this  a game? We just blurt out whatever word comes next to mind? In that case mine is ‘genuphobia’. It means an unreasonable fear of knees.”
“What’s the word for a perfectly reasonable fear of annoying idiots?” inquired Jessamine.

Her dialogue sways from the hysterical one liners that have you laughing out loud, to the deeply personal moments that make you want to hold onto the words until they’re engraved in your memory. Viscerally gritty prose that flows so exquisitely that you often forget that you are even reading at all. I became so immersed in the book that it felt as real and touchable as watching a movie, rather than reading words on a page. It’s an incredible talent and one that marks Clare as one of the best young adult writer’s around at the moment.

Clare fans will anticipate the inevitable cliff hanger at the end of the book, and they won’t be disappointed. Whilst lacking the mind numbing punch of the latest finale in ‘City of Fallen Angels’ it is a quieter moment with all of the intensity and shock that you could possibly want.

‘Clockwork Prince’ has to be my favourite Cassandra Clare book to date, and is definitely one of my favourite books of the year, but it’s left me yearning to find out how the final act will play out in the final instalment of the trilogy…