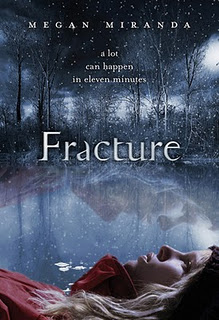 Release Date: 5th January 2012
Eleven minutes passed before Delaney Maxwell was pulled from the icy waters of a Maine lake by her best friend Decker Phillips. By then her heart had stopped beating. Her brain had stopped working. She was dead. And yet she somehow defied medical precedent to come back seemingly fine - despite the scans that showed significant brain damage. Everyone wants Delaney to be all right, but she knows she's far from normal. Pulled by strange sensations she can't control or explain, Delaney finds herself drawn to the dying. Is her altered brain now predicting death, or causing it?
Then Delaney meets Troy Varga, who recently emerged from a coma with similar abilities. At first she's reassured to find someone who understands the strangeness of her new existence, but Delaney soon discovers that Troy's motives aren't quite what she thought. Is their gift a miracle, a freak of nature-or something much more frightening?
This book had so much potential, but it ends up not quite reaching it. And for me most of that was due to one character - Troy, who I really disliked throughout the novel, to the point that I almost put it down. Congratulations to Ms Miranda for creating a character who elicited such a strong reaction from me, but unfortunately it did result in me not caring over much for the book by the end.

Delaney was a really interesting character who's put in this impossible situation. It's not clear whether her inability to communicate is as a result of the accident or whether she was like that before - but some of this communication does come across as cold and harsh towards those who are trying to show her affection. It also has the unfortunate side effect of making her seem very self absorbed, and I did wonder whether had she been a little less so whether a lot of the conflict could have been avoided.
She does have a few moments where her actions seem very random - and some changes of heart that seemed a little out of place, but for the most part she comes across as a strong character who is just trying to get back to normal when faced with some really difficult situations.
I really felt for her in some of the interactions with her parents, and I think that relationship could have had even more time devoted to it, as I found it to be one of the most interesting relationships of the book - seeing how her mother particularly handled her accident.


The secondary characters were a little flat and underdeveloped, with a lot of events and reactions seeming to be completely random due to lack of character development. I found the scene in the church to be particularly out of the blue and was shocked at the turn of events. The rest of the secondary characters felt a little stereotypical and I would have liked to see a little more development of them.
The only character I had a genuine connection with was Decker – who had a horrible time of it with Delaney, despite the fact that he’d saved her. I would have liked to have seen more of his and Delaney's story development, instead of it being put on the back burner against Troy and Delaney's story.

I really dislike this thing that quite a few young adult books have going at the moment, where the heroine feels that it’s ok for one of the male characters (usually a love interest) to treat her abysmally. It’s ok for him to frighten, intimidate and even hurt her, for a number of reasons usually along the lines of ‘he doesn’t know any better ‘he’s been starved of love’ or, my favourite ‘he doesn’t really mean it’. It’s such an awful thing to be saying ‘hey girls, this is ok.’ When it really, really isn’t, and this book unfortunately falls into that trap to a certain degree with Troy. Yes he gets his comeuppance, but for me personally, it was too little too late  compared to how he treated Delaney and reacted to her in the rest of the novel.

I don't know if you've guessed yet that I really disliked Troy. He was twisted and messed up, and abusive towards Delaney, yet she justifies it, and keeps on going back to him. This was one of the reasons that ‘Fracture’ didn’t grab me once he was introduced. Troy didn’t sell himself to me in any way shape or form, I felt like putting the book down every time Delaney went back to him and justified it all away.

I think that part of my disappointment lay in the fact that the book tried to take the plot in too many different directions. Too many characters suffering from guilt and rebuilding relationships – that would be enough to keep this book on a really strong level. But then we have the idea of sensing people dying, which is never truly developed or explored, and from there we get into the cycle of life and death and huge god complexes on Troy’s part. There’s just so much crammed into a 272 page book that nothing really gets truly worked on, it’s all rushed, when there are so many good points that could have been explored. If it had either been a longer book and taken time over all the different directions, or cut out a couple of the tangents then the book would have been absolutely brilliant.

However, I realize I am incredibly biased – mostly because of Troy. That single character was enough to make me want to stop reading, and truly put me off the book. However I really enjoyed the rest of it.

On the positive side, the ideas were all there, just not explored fully, it’s a very interesting concept and I would have liked to have seen more.
Ms Miranda’s writing is really strong, and I’d like to see what else she creates, because whilst this book didn’t do it for me, I’d love to read more of her work.

All in all this was a book that could have been so good, and just ended up falling short. The writing was really good and I would recommend if the blurb interests you to give it a go.