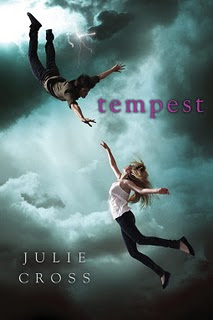 Jackson Meyer is hiding a secret. He can time-travel. But he doesn't know how he does it, how to control it or what it means. When Jackson, and his girlfriend Holly, find themselves in fatal danger, Jackson panics and catapults himself two years into his past, further than he's ever managed before, and this time he can't find a way back to the future. All the rules of time-travel he's experienced so far have been broken and Jackson has no choice but to pretend to be his younger self whilst he figures out a solution. Jackson is tearing himself apart with guilt and frustration, wondering if Holly survived. He's also become the target of an unknown enemy force and it seems even his dad is lying to him. Jackson is racing against time to save the girl he loves, but to do that he must first discover the truth about his family and himself.

I wasn’t entirely certain what to expect with ‘Tempest’ – I went into it with no preconceptions or knowledge of the basic plot. And I have to admit, I was pleasantly surprised.

First off, it’s narrated by a boy. There are far too few young adult books narrated by convincing boys at the moment, so it was a refreshing change to
see something from a male perspective.

And second it was a really exciting, unique and fresh plot. And that in itself is impressive. It doesn’t follow the stereotype that you might expect from a book about time travel. Similar to ‘The Time Traveller’s Wife’ in some respects, it really took the time to develop Jackson as a person, giving him clear and well defined motives for everything he does. He’s a very believable, likeable character who really evolves over the course of the book as he’s subjected to more and more awful things as he’s trying to protect the people he loves.

The relationships were beautifully explored. Jackson and Holly, in all her different time lines was gorgeous. Whilst he was learning about the 2007 version of Holly (her younger version) and she was falling in love with him, we’re treated to not only him wooing her in that time frame, but how it happened in his own time frame in 2009. The flashbacks and moments between the two of them were beautiful and made for a really special and believable romance.

Jackson and Courtney, his twin sister, was another really well constructed relationship. We learn about her through Jackson’s memories but then we get to see him interact with her in some of his travels into the past. It’s a beautiful thread of the story that really pulled at me, and made me cry at several points.

And Ms Cross gets major points for the relationships, not just the two that I’ve mentioned but the others as well, because to create such a plethora of different types of relationships with the characters and to make all of them believable and realistic whilst making interesting storytelling is an impressive feat on its own.

However, this didn’t quite make the top rating because of a few problems. When Jackson starts to really develop his abilities, they all start manifesting very quickly with little to no explanation until later. All of a sudden he knows new languages, has a photographic memory and can use self defence and shoot weapons. It all just felt a little bit too convenient that it all came to him as he needed it.

Whilst the first half of the book develops quite slowly, the second half really goes to town. Now in a way this is good because the tension keeps getting notched up and the stakes are high. However, everything starts being splurged out and all of a sudden you have new rules, and you don’t know who to trust and who not to, and then look, more confusing back story! And then there’s some fight scenes and some more explanations and confusion and then hey, look, he’s a member of the CIA. It all just seemed too rushed, everything got tossed into the pot at once, and as a result I was left staring at the page going ‘what the hell just happened?’…

I wanted all of it to happen (although maybe some of it could be explained better because it does get awfully confusing in there) I just wanted it to unfold over a longer period of time. That way my brain doesn’t implode from an information overload.

So in all in all this is one of the ones to watch for the start of 2012. It’s got romance, beautiful relationships of the romantic, familial and friend kind. It’s got time travel, the CIA, and a mind boggling array of back story, plot and incredible story telling. I’d go pre-order it now, because Julie Cross is going to be one to watch.