Review: Eva and Eve: A Search for My Mother's Lost Childhood and What a War Left Behind by Julie Metz 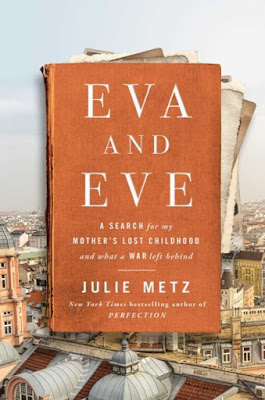 The author of the New York Times bestselling memoir Perfection returns with an unforgettable account of her late mother’s childhood in Nazi-occupied Austria and the parallels she sees in present-day America.

To Julie Metz, her mother, Eve, was the quintessential New Yorker. Eve rarely spoke about her childhood and it was difficult to imagine her living anywhere else except Manhattan, where she could be found attending Carnegie Hall and the Metropolitan Opera or inspecting a round of French triple crème at Zabar’s.

In truth, Eve had endured a harrowing childhood in Nazi-occupied Vienna. After her mother passed, Julie discovered a keepsake book filled with farewell notes from friends and relatives addressed to a ten-year-old girl named Eva. This long-hidden memento was the first clue to the secret pain that Julie’s mother had carried as a refugee and immigrant, shining a light on a family that had to persevere at every turn to escape the antisemitism and xenophobia that threatened their survival.

Interweaving personal memoir and family history, Eva and Eve vividly traces one woman’s search for her mother’s lost childhood while revealing the resilience of our forebears and the sacrifices that ordinary people are called to make during history’s darkest hours.

I adored “Perfection”, Metz’s memoir, and have incredibly fond memories of being curled up in front of the wood-burner drinking tea and reading, so I was delighted when the author contacted me offering a copy of her latest book to review.

I am, on the whole, a fiction reader. It takes a special kind of book to pull me out into the world of non-fiction, and Metz never fails to captivate me with her glittering words. This book caught on a particularly raw nerve following the death of my mum, and I felt a sense of kinship with Metz as she deals with the grief of her mother’s passing in the first section of the book, and how keenly she feels the loss of the pieces of her mother’s past that she’ll now never have the chance to ask about. That feeling of loss, of loneliness, of the need to understand and fill in the blanks that she never felt able to ask about due to a tumultuous relationship, are the driving force of the story as she picks up, puts down, uncovers a little more of the mystery and then is swept up in her own life again for a while.

Whilst on the surface it is a book about her mother, ultimately it digs into a host of lives that impacted the incredible events that culminated in her mother’s escape from Nazi occupied Vienna. Whilst sometimes keeping such a host of people straight in my head was bewildering, I loved Metz’s attention to detail and how she worked to uncover all the pieces that created this whole. It is a sprawling, beautiful book, that examines the family before, during and after such a cataclysmic and traumatic event, as well as uncovering those who made the escape possible, and Metz’s own exploration of the story and the people who helped her along the way. Her own retracing of her family’s steps added additional layers of colour as she found small ways to connect her present to the past and stand where her mother once stood. It is part an expression of grief, part examination of the America Metz was experiencing at the time of writing and the political upheaval and parallels to her mother’s story, and part love letter to her mother - a truly extraordinary woman.

With a delicate touch, Metz weaves all of this together into an incredible whole, and I found myself quickly captivated and desperate to snatch moments to read further. Indeed, I found myself missing Julius, Anna and Eva’s company in the days after I finished reading. I liked the quiet joy that pervaded their lives in Vienna before 1938, and felt keenly the desperate fear and determination that threaded through their escape.

This is an incredible and thought provoking book that opened my eyes to a slice of history I found I was shockingly ignorant over, and humanised it further with brief snatches of fiction as Metz imagines what life was like for her mother and grandparents in a life altering handful of years. Beautiful, poignant, and filled with love for her lost mother, this is an incredible book that I would not hesitate to recommend.