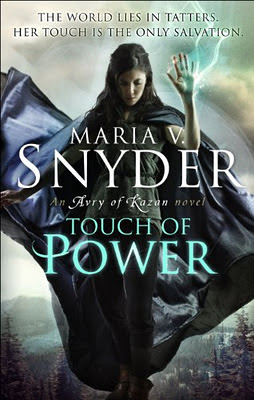 Release Date: 20th December 2011
You can pre-order your copy HERE

Laying hands upon the injured and dying, Avry of Kazan assumes their wounds and diseases into herself. But rather than being honoured for her skills, she is hunted. Healers like Avry are accused of spreading the plague that has decimated the Territories, leaving the survivors in a state of chaos.
Stressed and tired from hiding, Avry is abducted by a band of rogues who, shockingly, value her gift above the golden bounty offered for her capture. Their leader, an enigmatic captor-protector with powers of his own, is unequivocal in his demands: Avry must heal a plague-stricken prince—leader of a campaign against her people. As they traverse the daunting Nine Mountains, beset by mercenaries and magical dangers, Avry must decide who is worth healing and what is worth dying for. Because the price of peace may well be her life...

Maria V. Snyder is one of my all time favourite fantasy authors. She’s got a similar style to Tamora Pierce, but instead of teenagers, her heroines are closer to twenty, so deal with slightly different issues.

She has the perfect formula for a fantasy novel down; feisty heroine? Of course.  Gorgeous yet aloof and always slightly morally ambiguous bad boy love interest? Fabulous fantasy country with detailed monarchy, political structures, cultures and landscape as well as a ton of history? And a nail bitingly unpredictable and well written story? It’s all there.

I first fell in love with Snyder’s writing in her ‘Study’ series – particularly the first book ‘Poison Study’. In fact to this day, the relationship that springs up in Poison is one of my all time favourites. It’s slow, subtle, takes its time, and evolves into a beautiful equal thing, where the man would literally do anything to save his love. I’m a sucker for romance.
Snyder continued her winning streak with the ‘Glass’ series, taking on a minor character from the ‘Study’ series and giving her a story of her own, in the same universe.

And now we have an entirely new fantasy land to become acquainted with in the ‘Power’ series, and I for one am incredibly excited to see more. The level of detail, the plague, the wars, the cultures. It’s all there, it’s all incredibly slotted together, and I feel like the first book has only just scratched the surface. I am so excited to see more of this!

Snyder has an incredible ability to create these landscapes and cultures and make them real, and it adds an extra level to her books that help lift them into the truly extraordinary.

I adore her heroines – they are strong and feisty and refuse to sit back and let life happen to them (or men order them around for that matter.) Even if it’s futile, even if they’re scared, they fight – for what they believe in, for those they love, and it is so refreshing to see that. They are such good role models, and I immediately fall in love with them and root for them all the way through.

And Snyder knows how to make a cast of characters that works. She has a way of making the hero not immediately seem like a hero – he has to work for it, for love, for the woman of his dreams. But it’s always worth it. He’s not your average ‘hey you’re lovely so I’m going to swoon now!’ it’s subtle, the romance builds out of friendship, proximity and experience, and always feels believable. Three cheers for believable romance!

And the secondary characters. They get no less attention for all their secondary status – Snyder creates a brilliant framework and dynamic that makes the ‘gang’ come together and work brilliantly. Everyone is flawed, everyone is real and human, and it’s fascinating watching them work together.
And even the bad guys are faceted – no one is perfect, everyone is flawed, and everyone has a good and bad side to show.

I don’t want to ruin the plot, suffice to say that it is up to Snyder’s usual incredibly high standard – not predictable and just a joy to sit back and enjoy being swept away into a new fantasy world.

She’s created a brilliant setting for intrigue and struggles for power, and added in magic! Which makes me happy, but not just any sort of magic, no the type that has consequences, which makes me even happier So instead of Avry wandering around healing people left right and centre, she heals them and assumes their injuries. It makes the whole process a lot more personal, and adds a whole new level of jeopardy.

The ARC that I read had a few grammatical and spelling errors which I am sure will be picked up before the final proof, but otherwise the structure and quality of writing is at her usual high standard.

It’s another brilliant novel by Snyder, and the start of another fabulous series, and will make a brilliant close to his incredible book blogging year as it’s released on 20th December 2011, both in the UK and the US.