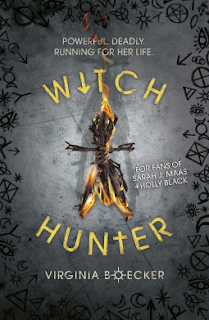 Your greatest enemy isn't what you fight, but what you fear.
Elizabeth Grey is one of the king's best witch hunters, devoted to rooting out witchcraft and doling out justice. But when she's accused of being a witch herself, Elizabeth is arrested and sentenced to burn at the stake.
Salvation comes from a man she thought was her enemy. Nicholas Perevil, the most powerful and dangerous wizard in the kingdom, offers her a deal: he will save her from execution if she can break the deadly curse that's been laid upon him.
But Nicholas and his followers know nothing of Elizabeth's witch hunting past--if they find out, the stake will be the least of her worries. And as she's thrust into the magical world of witches, ghosts, pirates, and one all-too-handsome healer, Elizabeth is forced to redefine her ideas of right and wrong, of friends and enemies, and of love and hate.

When you put comparisons to Game of Thrones and Graceling on the blurb for a book, I’m going to go in with very high and excited expectations. Unfortunately comparisons like that tend to end up as reader bait, rather than because the books bear any sort of resemblance, and ‘Witch Hunter’ is just such an example.

The blurb (plus the comparisons) had me very excited going in, but unfortunately the book really didn’t live up to any expectations I had and I ended up feeling incredibly disappointed and frustrated and nearly gave up on the book half way through.

This was due to terrible pacing, truly awful dialogue and a protagonist who suffers from a terrible case of one dimensionalism. There was nothing that made Elizabeth feel like a real person, I never got a real sense of who she was, what she wanted, anything that made her into anything more than a cardboard cut-out. She supposedly has these extraordinary fighting skills – she’s supposed to be the best Witch Hunter there is – but she never shows that. We see her in two fights, one where she accidentally kills someone and the second she just ends up hair pulling and slapping. Not exactly living up to the hype. She let’s herself be pushed around and manipulated and never seems to possess anything remotely resembling a spine. Where are the strong heroines I was promised? Don’t make comparisons to two novels with incredibly strong female characters if you then can’t deliver.

In fact all of the characters were cardboard stereotypes, none of whom had enough going for them to lift the novel up into something readable. The dialogue is awkward and cringe worthy, and we never learn anything much about any of the other characters. They’re just there to provide background decoration, fluttering sensations in the stomach area and occasional pieces of information.

The plot wasn’t much better. The ban on the magic is unexplained and that leaves a lot of gaping plot holes all over the place so that the story trips over itself several times. As a result the story is clunky and frustrating and never feels remotely believable. The pacing also leaves a lot to be desired as nothing really happens for the first three quarters, other than Elizabeth mooning over two different boys and a lot of wandering around the countryside, hair pulling and pretty dresses. None of that is enough to lift the novel up into something interesting to read and when the climax hits, it is too little too late.

All in all this was an incredibly disappointing read. All of the promise in that blurb and none of it is delivered. Terrible pacing, awful characters and dialogue, I was left feeling sorely disappointed by this one.