Review: Because You'll Never Meet Me by Leah Thomas 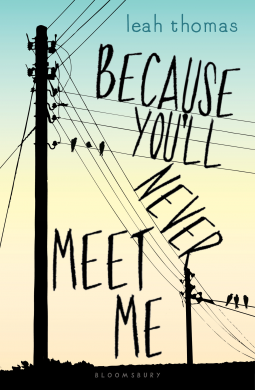 Ollie and Moritz are best friends, but they can never meet. Ollie is allergic to electricity. Contact with it causes debilitating seizures. Moritz’s weak heart is kept pumping by an electronic pacemaker. If they ever did meet, Ollie would seize. But Moritz would die without his pacemaker. Both hermits from society, the boys develop a fierce bond through letters that become a lifeline during dark times—as Ollie loses his only friend, Liz, to the normalcy of high school and Moritz deals with a bully set on destroying him.
A story of impossible friendship and hope under strange circumstances, this debut is powerful, dark and humorous in equal measure. These extraordinary voices bring readers into the hearts and minds of two special boys who, like many teens, are just waiting for their moment to shine.

I was crazily excited about this book, and then I started to hear rumblings that the end suddenly went very different from the rest of the book and was this contemporary or was it sci-fi? So I went warily into this one, unsure of quite what to expect.

Unfortunately I didn’t get along with it. For starters I didn’t connect with or like Ollie at all. His letters were amusing to start with but quickly degenerated into mind numbing exposition that I had to really work to get through. Nothing really happened, he was incredibly self centred and utterly hung up over Liz (who I also didn’t particularly like.) and as a result most of his letters felt like upbeat whinging. Who knew that could be a thing? He comes across as very young, I know he’s meant to be fourteen, but he seemed even younger than that. And his obsession with Liz never really made complete sense to me. Ok sure, he doesn’t see many people and his only friend stops coming to visit him after a traumatic experience. But the traumatic experience, whilst a little traumatic, was not quite the crisis situation that Ollie was making it out to be. There was so much build up, so much dragging of his heels when writing to Moritz, so much procrastination where he doesn’t want to tell him about it. And then it happens and I kinda felt, well, is that it? Liz doesn’t strike me as a particularly good friend, I’m with Moritz on this one. She seemed determined to ‘fix’ Ollie, and anyone who feels that people with disabilities or illnesses need to be ‘fixed’ to be ‘normal’ automatically gets me incredibly irate.

So Ollie didn’t really interest or appeal to me, which left me with Moritz. Moritz and I actually got along a lot better. I still found him to be ridiculously verbose and depressive, but I found his story to be much more engaging. I still found his ‘disability’ frustrating. I’m blind! But I can see everything! So really I’m actually fine! I felt like the set up had been ‘hey look, two disabled teenagers’ and then the rug was being pulled from under as the author went ‘ha ha, not really!’

It was a mixed bag, I struggled to continue reading, to persuade myself to even care about some of Ollie’s letters, and then suddenly out of the blue at 75%, the ridiculous happened. What had been a perfectly ok  contemporary novel with a couple of interesting tweaks, suddenly turned into full on sci-fi with no warning.
There was no build up, no sly clues along the way, just suddenly an info dump in one of Moritz’s letters that completely upended everything and made me do a double take. What was this novel? What had just happened? Had I missed something?

And then the end! Why oh why did Ollie suddenly have to be ‘fixed’, why did it suddenly have to become this thing that he’d grow into?! This goes back to my earlier point about ‘fixing’ people with illnesses or disabilities. It makes me feel like the rest of the book was obsolete, like I’ve been cheated somehow. That this novel that promised it would be about two teenage boys with disabilities had suddenly changed its mind and didn’t follow through at the end. That really frustrated me and left me with a bitter taste.


So this novel that I was crazily excited for felt like it wasn’t anything like the novel I was hoping for or expecting. I felt bored, frustrated and cheated and ended up not really feeling any sort of attachment to any of the characters.
I know plenty of people have loved it, have loved the characters and the writing style and the sudden change of pace at the end, but for me personally, this just wasn’t my cup of tea.