Review: This is Not a Love Story by Keren David 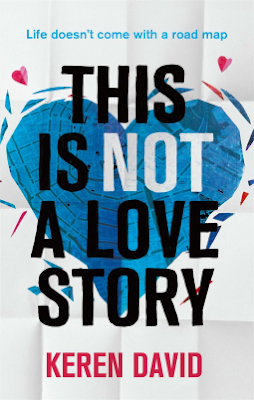 Kitty dreams of a beautiful life, but that's impossible in suburban London where her family is haunted by her father's unexpected death. So when her mum suggests moving to Amsterdam to try a new life, Kitty doesn't take much persuading. Will this be her opportunity to make her life picture perfect?
In Amsterdam she meets moody, unpredictable Ethan, and clever, troubled Theo. Two enigmatic boys, who each harbour their own secrets. In a beautiful city and far from home, Kitty finds herself falling in love for the first time.
But will love be everything she expected? And will anyone's heart survive?

Sometimes a book will get a huge amount of love and you can see what everyone’s talking about. Sometimes everyone seems to hate it and yet you yourself absolutely loved it. And sometimes, everyone loves a book but when you read it you cannot understand what they saw in it. This is what happened when I read ‘This is Not a Love Story’. I had heard so many good things about it, and yes there were quite a few elements of the story that I did really enjoy, but on the whole I found it a really frustrating read. Where was the story that everyone was raving about? Had I just picked up the wrong book?

Let’s split it up into what I did and didn’t like. First off, I loved the setting. Ever since I moved abroad I’ve been finding myself drawn more frequently to books set aside the UK and the US, and ‘This is Not a Love Story’ focusing on a group of expats in Amsterdam was wonderful. I loved seeing the community, the exploration of a new city and the brief mentions about how an expat community forms – you never know who you might meet where, and you tend to become friends very quickly with those people who are also fish out of water in this new country. Amsterdam was described beautifully and it was just so refreshing to have such a different culture, setting and outlook for a book simply from a change of location.

I also loved that sexuality was explored and that the love triangle trope was turned on its head. This was definitely a novel that didn’t explore the stereotypical route – as it says in the title, this is not a love story – and it was definitely a refreshing change to see.

As well as sexuality, it was also wonderful to see a book that explored religion, with both the point of view characters coming from very different Jewish backgrounds. Religion is so often something that is ignored in YA, so it was great to have it be so smoothly interwoven with the plot, without taking over.

It was also great to see social media play an active role in the plot. So many books these days try to ignore social media, I think mostly in fear of it dating the story. But social media plays such a huge part in so many people’s lives that to ignore it is frustrating. It was wonderful to see Kitty’s Instagram and the way that reflects her outlook on the world, how she feels everything needs to be perfect and sharable was so relatable and it was great how she started to examine her social media presence.

However, despite all the things that I loved, there were still things that didn’t work for me and that’s what dragged it down in rating.
The first section of the novel ‘Now’ left me feeling incredibly confused, it was a bizarre opening section because it was attempting to create tension for the rest of the story but instead it just left me feeling bewildered. I didn’t know who these people were, I wasn’t connecting to them, and it felt like they were in their twenties which was very strange to then go back and realise that they were in fact 16/17.

The pacing was really off for me. The opening is a strange lead in and then we go back and find out all the backstory that leads up to that point and I found myself getting further and further into the novel and feeling like nothing was happening. Where was it going? These characters were interesting, sure, but not enough to really keep me hooked. They all come across as incredibly immature. Of them all Ethan was probably the most interesting, along with Kitty, but even they had their moments. I really couldn’t stand Theo and his storyline with Sophie. The age ranges of the characters felt like it was all over the place – feeling like they were in their 20s in the opening, then learning they’re 16/17, but then there are sections of the book where they all start acting so immaturely that it feels as though they are 12 or 13. There were whole swathes of dialogue and thought processes that my mind boggled over. Yes it’s been a while since I was 16, but I’m fairly sure neither I nor my friends did/said/thought like this.

So whilst there were a lot of positives and reasons why I loved this book, there were also a lot of things that frustrated me and made reading it quite a laborious process. If you’re after a book that ignores the well-worn romance stereotypes and offers a gorgeous look at Amsterdam then this is the book for you. But be warned, the storyline can drag and the characters can be frustratingly immature.