Audiobook Review: An Ember in the Ashes by Sabaa Tahir 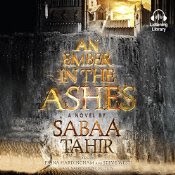 I am incredibly picky about my audiobooks. The narrator has to be right and it has to be a book I know otherwise I can't focus. I can't ever seem to listen to a new book the first time around, I need to know a story before I can start to listen. So I tend to end up with a few staple favourites that I return to when I have a migraine and can't read, or when I can't sleep. The good thing about a book that you know inside and out is that if you drift off and wake up several chapters later, you still know what's going on...

Which means that adding to my audiobook collection is a rare occasion indeed, but there are some times when the stars align and an audiobook is perfect, such as now with 'An Ember in the Ashes'.

My all time favourite audiobook (and probably if you forced me on pain of torture to choose just one book, my favourite book as well) is The Scorpio Races by Maggie Stiefvater. It is perfect. There is nothing like escaping back to Thisby with Puck and Sean and George Holly as narrated by Steve West and Fiona Hardingham.

So when I discovered that not only was 'An Ember in the Ashes' available in audio format, but that it was narrated by none other than Steve West and Fiona Hardingham, I actually whooped with joy.

They are a dream to listen to. Quite frankly I could listen to Steve West narrate shopping lists I love listening to him read aloud so much, and Fiona brings such a vibrancy to her characters. Together they bring an audiobook to life in such vivid clarity that listening to the book gives an extra depth that isn't accessible when reading.

I've already detailed just how much and why I love 'An Ember in the Ashes' in my review, and the audiobook offers all that I loved and more. Steve and Fiona are the perfect people to voice this story and these characters and I've found myself retreating frequently for 'just one more chapter...' ever since I first discovered the audiobook a few days ago.

They are both such incredibly skilled narrators and give each character such distinctive voices that you immediately know who's speaking and where you are. You become invested in the story, the stakes seem higher, the cost and fear more real. It's a rare gift to not just read a story, but to bring it to life in such vibrant clarity.
It's a brutal, heartbreaking and beautiful book and Steve and Fiona more than do it justice as they lovingly bring it to life. I cannot recommend it enough.
So if you enjoyed the book I highly recommend trying the audio. Or if you haven't yet had chance to pick up a copy but can fit in audiobooks on your commute then Steve and Fiona can transport you to the brutal world of the Scholars and the Empire.

(Of course now I've discovered that Steve and Fiona have also narrated 'The Fair Fight' by one of my Bath Spa Alumni Anna Freeman, so that's going on my to listen to list asap!)