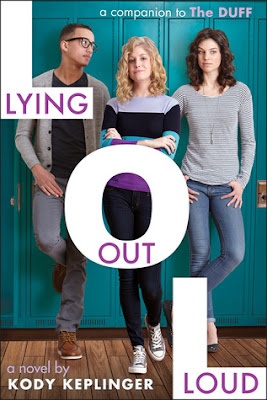 Sonny Ardmore is an excellent liar. She lies about her dad being in prison. She lies about her mom kicking her out. And she lies about sneaking into her best friend's house every night because she has nowhere else to go.
Amy Rush might be the only person Sonny shares everything with— secrets, clothes, even a nemesis named Ryder Cross.
Ryder's the new kid at Hamilton High and everything Sonny and Amy can't stand—a prep-school snob. But Ryder has a weakness: Amy. So when Ryder emails Amy asking her out, the friends see it as a prank opportunity not to be missed.
But without meaning to, Sonny ends up talking to Ryder all night online. And to her horror, she realizes that she might actually like him. Only there's one small catch: he thinks he's been talking to Amy. So Sonny comes up with an elaborate scheme to help Ryder realize that she's the girl he's really wanted all along. Can Sonny lie her way to the truth, or will all her lies end up costing her both Ryder and Amy?

I absolutely adored ‘The DUFF’ when I read it for the first time earlier this year, Bianca was sassy and brilliant and I loved the relationship between her and Wesley. So I was insanely excited to find out this was a companion novel with Amy, Wesley’s little sister as one of the main characters – plus there would be cameos from Bianca and Wesley themselves.

However the idea and the actuality were two very different things. Whilst I was a huge fan of Bianca I really didn’t gel so well with Sonny, she was so destructive and her compulsive lying and constant bragging about her lying abilities were frustrating and stopped me from really connecting with her as a character. The further into the story I got the clearer it became that whilst Sonny thought she was fooling everyone, and yes she did manage it with a few people, on the whole the only person she was successfully lying to was herself. Everyone else just saw straight through it.

Without that connection to Sonny the book never lifted beyond ‘okay’ for me. Keplinger has a talent for writing very polarizing characters. Bianca split people’s opinions just as much, only I fell in the loving her camp rather than finding her abrasive. This time I’m on the other side of the fence and so whilst it was a quick and at points enjoyable read, I never recaptured the same enjoyment I experienced whilst reading ‘The DUFF’.

That then coloured all of my other feelings for the story. I didn’t find Wesley and Bianca as interesting in their brief cameos, I never really connected with Amy and she felt like a criminally underused character that I was looking forward to getting to know, and Ryder never captivated me the same way that Wesley did.
I love that Keplinger writes flawed characters – it was one of the reasons I loved ‘The DUFF’ so much but I didn’t find Ryder and Sonny as easy to relate to.

So whilst my enjoyment of the book was marred by these, they were personal preferences. The story had all the elements that I loved in ‘The DUFF’ it was just a shame that I didn’t connect with the characters. I know a lot of people will love this story and the characters as they did with Bianca. But for me personally I’m going to stick with ‘The Duff’.