Review: Under the Lights by Dahlia Adler 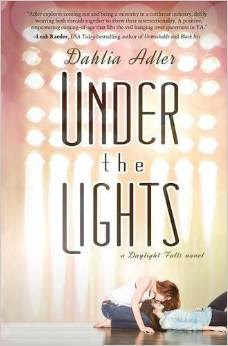 Huge thanks to Netgalley and Spencer Hill Contemporary for sending me a copy in exchange for an honest review.

Josh Chester loves being a Hollywood bad boy, coasting on his good looks, his parties, his parents' wealth, and the occasional modeling gig. But his laid-back lifestyle is about to change. To help out his best friend, Liam, he joins his hit teen TV show, Daylight Falls...opposite Vanessa Park, the one actor immune to his charms. (Not that he's trying to charm her, of course.) Meanwhile, his drama-queen mother blackmails him into a new family reality TV show, with Josh in the starring role. Now that he's in the spotlight—on everyone's terms but his own—Josh has to decide whether a life as a superstar is the one he really wants.
Vanessa Park has always been certain about her path as an actor, despite her parents' disapproval. But with all her relationships currently in upheaval, she's painfully uncertain about everything else. When she meets her new career handler, Brianna, Van is relieved to have found someone she can rely on, now that her BFF, Ally, is at college across the country. But as feelings unexpectedly evolve beyond friendship, Van's life reaches a whole new level of confusing. And she'll have to choose between the one thing she's always loved...and the person she never imagined she could.

If you’re after a contemporary romance this summer but you’re bored of all the cliché, boy meets girl and butterflies and tingles ensue, then this is the book for you.

It’s the second in the Daylight Falls books, but don’t let that put you off as I didn’t even realise there was a preceding book until I was well into the story. It works really well either as a standalone or as a sequel and you won’t have to play catch up to get into the story.

Going into the story both point of view characters, Josh and Vanessa were incredibly unlikeable and hard to connect with. Josh particularly is a grade A horror – think Chuck Bass, but worse. But the story was compelling, it swept me up and pulled me in and so despite the fact that I wasn’t sold on either of the characters who were showing me their world, I wanted to know more. And I am so glad I did. The further into the story you get the more you begin to warm to the characters and to relate to them. Vanessa is such a wonderful character once you get past her self absorbed superficial act in the first few chapters. Josh takes infinitely more time and patience to reach a point where you genuinely care about him, but he too is worth the wait.

Like I said this isn’t your stereotypical boy meets girl story, so whilst there is some attraction between these two, it is only a tiny side part of the whole. It is more two viewpoints into these two very different people’s lives and all the confusions and messed up things they’re going through. Both of them are stuck in situations they don’t know how to deal with, and whilst we may not all be actors in Hollywood, they are situations that everyone can relate to.
The book tackles friendship, family, sexuality, emancipation and trying to find your place in the world. It’s an incredible book, one that doesn’t shy away from tough subjects and flags up so many things. I wanted to weep and hug this book at times for giving such an honest and realistic portrayal of these problems.

Whilst Josh was a fascinating character and I did even come to like him by the end, this book was, for me, all about Vanessa. She’s determined, she loves her job, she wants to succeed and please her parents and satisfy her agent/fans/public. She works insanely hard and never really does anything for herself. And as well as all that she is Korean and has a major part in a tv show, and she never forgets how lucky she is to have a major role. As well as all her difficulties as a young adult trying to find her way in the world and balance everything in her life she is going in with her eyes wide open about the difficulties placed on her in her chosen profession because of her skin colour and ethnicity. She’s type cast in minor roles and desperately afraid that her career will end with the role on the show. It is a brutally honest look at the acting business and how girls, particularly girls who aren’t straight, white and skinny, have everything stacked against them.

But not only all of that, which is awesome just on its own, she is also coming to terms with her feelings for another girl and her own sexuality. And this isn’t just a book that glosses over the subject and the feelings, Adler refuses to compromise and makes this a wonderfully honest and frank portrayal of the relationship Vanessa begins to build. She gives it as much time and development and detail as you would find in any straight romance book, and I love that.

This book is awesome on so many levels, and it is so bold and brilliant and honest and I flew through it in a matter of hours. I became so invested with the story and characters and I was desperate to see how it would all turn out.

The only reason that this wasn’t a full five star read was because of the unlikeability of both characters in the first few chapters, that was the only thing that knocked down what is otherwise a fantastic book.

If you’re after a diverse read, a book that deals with a female same sex relationship and a whole host of other awesome, read this, read this now. I can’t wait to get my hands on everything else Adler has written now, I’m definitely a fan of someone who has the gumption to write a book like this and to pull it off with such style.