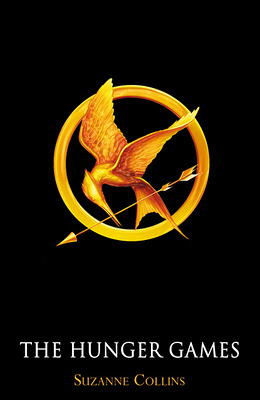 In the ruins of a place once known as North America lies the nation of Panem, a shining Capitol surrounded by twelve outlying districts. The Capitol is harsh and cruel and keeps the districts in line by forcing them all to send one boy and one girl between the ages of twelve and eighteen to participate in the annual Hunger Games, a fight to the death on live TV.

How have I not read this book before? Ok let me rephrase that – why on earth have I steered clear of these books??

I have a terrible habit of seeing a cover that I’m not fussed on, and hearing the title over and over because everyone’s talking about it, and I can’t seem to get away from it, so I decide to wait and pick them up at a later time.
More fool me.

Finally, about three years after most of the hype, I saw the trailer. Youtube it, it’s absolutely awesome. And I suddenly realized I’d made a huge mistake and immediately went out and borrowed a copy off one of my friends. And then I didn’t surface for four hours…

I was hooked from the first page, I didn’t put the book down once from start to finish, just sat and read it straight through. Katniss is such an incredibly real and likeable character. Tough because she has to be, but with a real and honest personality that I couldn’t help but find engaging.

We’re thrown straight into the action, with a lot of backstory about Panem and the Districts, but none of it felt overloaded or too much – Collins sets it up in such a way that I was desperate to know more. I wanted everything and I wanted it now.

The pacing is absolutely spot on. There’s a crushing sense of inevitability that dogs the characters and I was equal parts desperate to find out what happens, and hoping to prolong it so I didn’t have to say goodbye to anyone.
But when the goodbye’s came, oh my word they sure packed a punch. Tears. Lots of tears.

I know that there’s supposed to be a love triangle going on between Katniss, Peeta and Gale, but I honestly didn’t feel it. This will be something I talk about more in my reviews of the final two books, because it’s something that comes to the fore in those, but for me there was no contest – particularly in this book. I was for Peeta all the way. For once I was rooting for the good buy – the nice guy who would do anything to protect the girl he loves, even sacrifice himself. Too often I find myself rooting for the bad boy, you know the ones, they usually sport a fair amount of black and do their fair share of bad things as well as good things, but I was completely swept away by Peeta. Guys, I think I have a new fictional crush.

I don’t really want to talk about the plot, because it’s one of those books that I’d hate to ruin for others, just know that it tears you apart and doesn’t let you go and you are in for one hell of a ride once you pick this book up.

I love how much time is taken up with the prep, and the secondary character’s we’re introduced to – Cinna for one was an absolute favourite, but they all stood out in some way or another. Every detail is beautifully crafted into the whole, and the world stood out for me as one of the best constructed I’ve read in a while – with such a level of history and backstory that unravels over the course of the three books.

Even well after finishing reading it, this book has stayed with me. I keep thinking about it and slipping back inside it. Analysing different moments and remembering odd pieces of the games – I have a feeling it won’t be long before I pick it up to read again.

Others have said far more eloquently what I’m attempting to say – that this book is one of the best I have had the pleasure of reading in a while, and the standard of books out there at the moment is insanely high as it is. If you’ve already read it, you’ll know what I’m talking about, and if you haven’t? Don’t make my mistake, go and pick it up now.

Oh and get excited for the film, that trailer looks pretty epic…