Review: Daughter of the Flames by Zoe Marriott 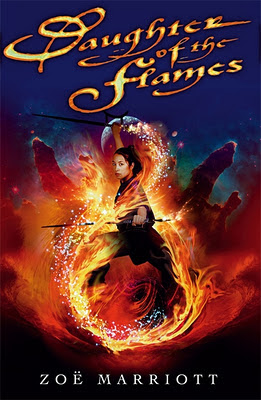 Inside an ancient temple in the mountains, fifteen-year-old Zira trains in the martial arts to become a warrior priestess who can defend the faith of the Ruan people. Bearing a scar on her face from the fire that killed her parents, the orphaned Zira is taught to distrust the occupying Sedornes. Terror strikes when the forces of the tyrannical Sedorne king destroy the only home she knows. To survive, Zira must unravel the secrets of her identity, decide her people’s fate — and accept her growing feelings for a man who should be her enemy.

I absolutely loved Zoe Marriott’s latest book ‘Shadows on the Moon’ so I was desperate to get my hands on everything else she’s written to fill in the time between now and ‘Frostfire’ coming out later this year.
However ‘Daughter of the Flames’ didn’t quite hit the mark with me in the same way as Marriott’s other two books.

It was a fantastic premise, with a brilliant heroine at its heart, I just felt as though some parts were a little underdeveloped. I would have quite happily read twice its length just to see more of the development between Zira and Sorin. I loved their hesitancy and awkwardness and the fact that this relationship developed out of a need to save their people, not out of anything else, but we skipped over so much between them that I felt like I never fully bought their relationship.

I wanted to see more of that development, because after a point what romance and tension there was between them fizzles out, and becomes almost unimportant to the story, yet it’s still supposed to be a key element.
Another aspect of the romance that I didn’t buy was that once again we are given a paragraph in which the heroine suddenly realises she’s in love with the hero, and I want, for once, to be able to see that relationship build instead of being told about it.

As I said, Zira was a fantastic heroine, strong, independent, and driven by a need to protect her people. But again, we had the internal conflict of who was she really, and I wanted more of that, more development, more resolution.
Sorin again, I felt was a little under developed, but what I saw I absolutely loved. He wasn’t your stereotypical male hero, but I didn’t feel like we really got to see that, or see his developing feelings for Zira.

I loved the world building, Marriott really is a master of fantasy, and really creates a world you can practically smell and taste. I thought the religious elements were well developed and that overall the plot was exceptionally well done.

I love villains who have something more about them – some backstory or twist that makes it all that much more exciting and intriguing, and we definitely had that here.

In fact everything came together to make a really, really good book, as I said at the start it just felt like some aspects were rushed or under developed. I loved Marriott’s other books ‘The Swan Kingdom’ and ‘Shadows on the Moon’, and I think that her writing has developed hugely in the time between ‘Daughter of the Flames’ and ‘Shadows on the Moon’ and I cannot wait to see how ‘Frostfire’ turns out.

So all in all, a very good book, but not Marriott’s strongest, but still a very good fantasy read.