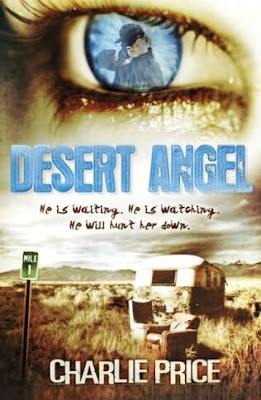 Release Date: 2nd February 2012
With thanks to Random House Children's Books for providing me with a copy to review.

He is waiting...
He is watching...
He will hunt her down.
Angel is on the run. Her mother is dead, her body buried in a shallow grave by her latest boyfriend, Scotty, a ruthless, illegal hunter who is prone to violence and who now wants Angel dead before she can talk to the police.
Angel has lived through more than a young girl should have but she's determined to stay alive.
But in the scorching heat of the open desert, where can she hide?

This book completely exceeded my expectations. A high paced thriller that draws you in and whisks you along to the climax.

The premise didn’t appeal to me hugely, but as soon as you’re introduced to Angel I stopped caring. She is such a brilliantly constructed character who made me want to cry and give her a hug and shake her for being an idiot and take her away from all the horrible people.

At fourteen, and completely damaged by her Mother’s attitude and her string of no-good boyfriends, Angel is by far one of the most savvy and intelligent youngsters around. She refuses to let grief or fear consume her, instead watching, waiting and running as she tries to outwit Scotty, the latest of her Mother’s boyfriends, and by far the most terrifying of them all.

I wasn’t expecting the host of secondary characters that help Angel along her journey, and they truly make the story. They gave the story a heart which Angel, despite how well created she was, would have been unable to achieve (at least at the start.) They offered a humanity and hear to the story for the reader and for Angel as well, and bring about a very well-crafted character development that really made the story for me.

The only thing I found frustrating was Angel’s complete lack of observation. Most times she is so together, so with it and on top of what she needs to do to stay alive – whether she likes what she has to do or not – that I found it frustrating, and a little unbelievable that she would miss such key clues as are pointed out to the reader.

A few of the plot lines either weren’t quite developed enough to satisfy me, and as a result felt a little bit weird to read, but on the whole this is a short but very satisfying read.

Price keeps the tension high throughout, and I raced through the book in a matter of hours. It’s a fantastic plot, with a host of characters that really ground it in reality, and offer a beautiful backdrop of heart and humanity that make this a fantastic read.