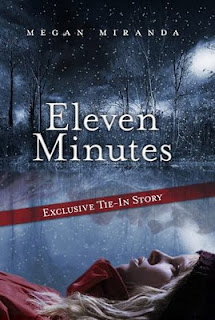 Eleven Minutes by Megan Miranda
Fracture is told from Delaney's perspective, and if you've read the first two chapters, you know that she falls through the ice in chapter one, and she wakes up 6 days later. And what happens in between—well, that's Decker's story.
This is the story of those eleven minutes, and the six days that follow, from his perspective. Because while it must be terrifying to be trapped under the ice, it's a different kind of terror seeing your best friend trapped...
Especially if it's your fault.

‘Tomorrow is Today by Julie Cross
The year is 2009. Nineteen-year-old Jackson Meyer is a normal guy… he’s in college, throws lots of parties, is interested in a girl he can’t have, and oh yeah, he can travel back through time. But it’s not like the movies – nothing changes in the present after his jumps, there’s no space-time continuum issues or broken flux capacitors – it’s just harmless fun. 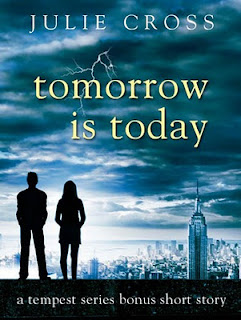 There seems to have been a sudden influx of short stories to go with new releases. You know the sort, prologues and short tasters to get people excited about the books before they come out, and after reading a few of them I think it’s time we talked about it.

Because I am all for promotion of a new book, and short stories to give people a taste for the characters, the world, the plot, the romances, these are usually good things but I think there is a fine line which some of them walk, and some of them fall straight off.

Two examples that spring to mind are ‘Eleven Minutes’ by Megan Miranda and ‘Tomorrow is Today’ by Julie Cross. Both of these fabulous authors had début novels out at the start of January, and both of them released short ‘teaser’ stories prior to the release to wet peoples appetites.

Now I read these after reading the novels, and had really strong, and completely opposite reactions to them. I had some problems with ‘Fracture’ as anyone who has read my review will see. I didn’t connect to Delaney as I was supposed to, and was put off the whole thing by Troy, who made my skin crawl and was enough to make me want to stop reading the book altogether. Round of applause for Ms Miranda for creating such a believable character that produced such a strong reaction.

I then read ‘Eleven Minutes’ which is essentially the first couple of chapters of ‘Fracture’ told from Decker’s point of view instead. And I loved it. This shows just how awesome Miranda’s writing is and how much my reaction to ‘Fracture’ was just a personal reaction, not a reflection on the writing. I found it engaging, it made complete sense both after reading ‘Fracture’ providing me with new insights that I wouldn’t have had from Delaney’s coma state, but also giving me enough information that even if I hadn’t read the novel first I would have understood what was happening and cared about the character’s. I loved it, and it was a brilliant example of how teaser stories can peak interest in a book before it’s even been released.

Then we have ‘Tomorrow is Today’ by Julie Cross. This was to create a buzz for her new novel ‘Tempest’ which I absolutely adored, but something about it just didn’t work.
As someone who came to the short story after reading the novel, I knew the characters and the premise quiet well, but I think that if I hadn’t read the novel first I would have been completely lost. The thing that struck me was that it didn’t seem to have a purpose. It didn’t add very much to the characters or the story, in fact it seemed more like a bonus deleted scene than a story. There were a few nice moments between Jackson and Holly, but it didn’t really tell me more about them. I didn’t learn anything about Jackson’s abilities, and without the information about it that I understood from Tempest, I would have been confused by that as well.

If it had added another point of view or a bit of relevant backstory then I would have felt differently, but I was left feeling a bit stumped as to why it had been used as a teaser for the novel.

It left me feeling really strange, because as I said, I loved Tempest, it was one my favourite début books this year, but the short story really didn’t do it for me. And I wonder whether people who had read the short story first would have been put off reading the novel after reading it – which is tragic, because the novel is awesome.

So as someone who isn’t fussed on short stories on the whole, I’m a bit torn about them being used to promote a new book. Sometimes they work, sometimes they don’t, but I think that if they add a new perspective, a new bit of backstory, and they work as clear concise stories in their own right instead of leaning on the novel entirely for context, then they’re a great idea.

But what do you think? Are you a fan of teaser stories? Or do you steer clear of them and go straight for the book itself?
Posted by Rosy at 10:00