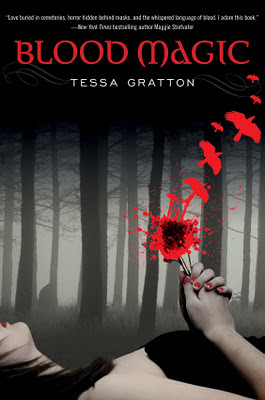 A huge thank you to Harriet at Random House Children's Books for sending me a copy to review.

It starts off simply.
Draw a circle ... place a dead leaf in the center ... sprinkle some salt ... recite a little Latin ... add a drop of blood ...
Maybe that last part isn't exactly simple. Yet somehow it feels right to Silla Kennicott. And nothing in her life has felt remotely right since her parents' horrific deaths. She's willing to do anything to uncover the truth about her family—even try a few spells from the mysterious book that arrived on her doorstep ... and spill some blood.
The book isn't the only recent arrival in Silla's life. There's Nick Pardee, the new guy next door who may have seen Silla casting a spell. She's not sure what he saw and is afraid to find out. But as they spend more time together, Silla realizes this may not be Nick's first encounter with Blood Magic. Brought together by a combination of fate and chemistry, Silla and Nick can't deny their attraction. And they can't ignore the dark presence lurking nearby—waiting to
reclaim the book and all its power.

Can we all just take a moment to celebrate Gratton’s fabulous construction, otherwise known as Nick?
A boy, yes I know, I’m so fickle over fictional boys, who is not conventionally yummy, yet still pulls it off, wears a trilby hat and a three piece suit and can actually dance. The party scene where all of these things come together actually had me swooning like a school girl. There are not enough fictional boys wearing trilby hats and suits and dancing. Any authors out there listening – please make some more. Will pay good money for them//pimp your book out to everyone. So let the pimping begin.

I love books with magic in. The first books I ever took out of the school library at secondary school were Tamora Pierce’s ‘Song of the Lioness’ Quartet, and ever since, a good book with lots of magic? You can’t beat it. Tamora Pierce, Maria V Snyder, Ms Gratton, please join them in your rightful place on my shelf of magic books made of awesome.

Seriously this book was fab. I loved the concept, I loved the characters, and I loved the writing. It didn’t read like a first book – there was a confidence in the writing that spoke of many books already under the author’s belt, and made the story really come alive.

It took its time, really enjoying building up the characters so we cared about them, the relationships so they were believable, and the plot so it was complex and detailed and full of twists and turns.
I could have done with some more explanation about the magic – who could do it etc. but I really liked the build up, the book, the explanations and the slow interweaving of the two different stories. And there were some sly twists slipped in there so that the outcome and solutions weren’t obvious from the beginning – misdirection, I like your style Ms Gratton.

I loved the time spent building the characters up, so I really liked all of them. They all felt real, although it probably says something about me that I was a little untrusting of some of the trustworthy characters – apparently I just don’t trust anyone who is genuinely nice from the get go…
I liked the split narrative with both sides being told – both Josephine’s, but also seeing how Nick and Silla reacted to each other, how that developed and not just getting one side of it. And it was so refreshing to see the guy mooning over the girl more than the other way round. In fact Nick was just awesome. I think I’ve already covered it earlier, but I really loved him as a character. He was quirky, funny, a gentleman but a bit of an arse at the same time. He just felt so real, so human and so utterly fab – I was hooked on him from the start.

I was slower to warm to Silla and Reese, it took a bit longer but they were still very well crafted. Silla’s development and arc over the course of the book was something fabulous to watch, and I really can’t wait to see what happens in book two, whether we get to see more of that developing.

Another awesome thing was that this book really didn’t shy away from the blood and guts and gore and general squeamish moments. I’m not normally squeamish, but this had even me shuddering at points. It was brilliantly pitched and worked so well, enough to make it gross and brilliantly believable and pricey for the magic, without being over the top and gratuitous.

There were a couple of things that didn’t quite gel for me – the first being Nick’s overuse of the word ‘babe’. A few times? Yeah sure, that makes sense, it probably would be part of his vocabulary, but he takes the use above and beyond with pretty much every sentence directed at Silla having the word babe in there somewhere. In fact after reading I put a ban on the word for my friends and family so I could have a break from it.

The second thing wasn’t anything to do with the writing itself, but is a note to the publishers instead. Please, I’m begging you, I know that when trying to represent diary or letter writing, using cursive pretty italic script helps show that, but if you use the insanely tight hard to read writing it really gives me a bad case of the grumps. Maybe I should be wearing my glasses more, but as far as I’m concerned, if I’m struggling to actually read the damn thing, it’s a bad sign. And if those sections hadn’t been so important to the story I would have skipped them entirely to save me the eye strain.

The third was that Nick seemed to do a very abrupt 180 on his views of magic. Going from – evil, most evil thing in the world! To, hey, you know what, I kinda like this whole healing my scars in thirty seconds thing! Was a little disorientating. I could kind of see the logic with his determination to save and protect Silla, but at the same time, I could have done with a little more explanation and time taken over the change.

On the whole though, I absolutely loved it. It was an incredibly strong début by an author that I will have no hesitation reading again. A fantastic story and perfect for fans that like their magic with a side of gore…

Other fabulous reviews of Blood Magic:
The Book Smugglers
Writing from the Tub
Serendipity Reviews
Good Books and Good Wine
Posted by Rosy at 14:30