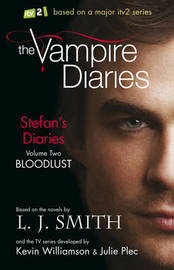 Stefan and Damon Salvatore are now vampires, and must deal with the consequences of their fate. They escape their small hometown of Fell’s Church, which is overrun with vampire hunters, and travel to New Orleans. While Stefan revels in his powers, Damon continues to mourn the loss of Katherine, the beautiful vampire that turned them both. But New Orleans offers temptations and dangers. Stefan falls in love with another human, and his willpower is tested to the limit. Damon ends up captured by an evil, sadistic vampire hunter. Stefan knows that he must save his brother, but will it cost him his new love?


Edit: I've since discovered that Stefan's Diaries are written by a ghost writer - although in the kindle edition that I read there is no indication of this. Therefore I retract my comments about L.J.Smith's writing not being as good as it was in the original Vampire Diaries series. It also explains a lot of the other problems I had with this book. I will leave the review unaltered, but please take it as my problems with the ghost writer's writing standard - not L. J. Smith's.
I read and reviewed the first of Stefan’s diaries about a week ago, and I was pretty disappointed. I love the TV show, and I love the original books, but this read more like fan fiction that hadn’t even bothered to get the bits it was copying from the TV show right.
So I wasn’t fussed on reading the second one, but it seemed fair to give it another chance – I am a complete sucker for the Salvatore brothers, and I really wanted to see what L. J. Smith did with them in this new alternate reality where they no longer come from renaissance Italy…
This book was better, but only in that it had stepped away from the material covered in the TV show, and so it wasn’t awkwardly conforming to events that had already been written – and doing a bad job of it at that.
Instead we saw Damon and Stefan running away from Mystic Falls and those that hunted them there, and find their way to New Orleans, for a fresh start.
Most of my complaints about the first book still stand here. The writing is way too modern, it simply wasn’t believable that she was writing about these two boys in 1864 and using modern day language. But the thing that really gets me is that there is so much that could be done – so much story that could have been covered. These two newly turned vampires have eternal life, and yet the events are incredibly rushed. Again, it felt like this was the bare bones of a draft, and I kept waiting for someone to come and flesh the story out. It has so much potential, a wealth of information and situations that could have been mined, and they’re just wasted.
However, because it deviates from the TV show, this book was a lot better. It was simply Smith imagining what the brothers did next, and it was an interesting read. It was great to see what turned Damon from being the good boy who didn’t want to be a monster, into a vengeful killer, and what made Stefan stop being a heartless murderer. But again, it felt rushed. Stefan stopped being bad ass way too quickly. Given how characters have talked about his past, I was expecting a lot worse than what he got up to. So he killed a few people? Damon has done way worse… And we’ve been lead to believe that Stefan used to be like Damon. I just felt a bit let down that Stefan had barely dabbled in being a bad ass before he started atoning.
However, Damon’s transformation makes a lot more sense with this back story.
One thing that really irritated me though, is that the Lexi we’ve met in the show drinks human blood. She doesn’t go out and kill, but she does drink human blood, and comments to Stefan that she tried drinking animal blood but couldn’t stand it. In the book she doesn’t drink anything other than animal blood…
It just frustrates me that these two mediums are claiming to be telling the same story, and there are massive plot holes in the books that don’t make any sense if it’s supposed to be the same as the show.
Like I said, it reads like fan fiction.
However, this book is worth a read, and is much better than the first of Stefan’s diaries. L. J. Smith seems to find her stride a little better in this one. I’ll keep an eye out for the third instalment, and hope it improves further on the low standard that’s been set so far.
Posted by Rosy at 16:08