Review: P.S. I Love You by Cecelia Ahern 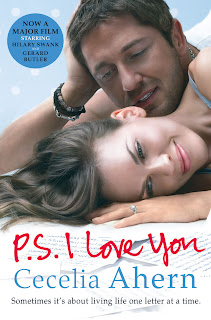 Some people wait their whole lives to find their soul mates, but not Holly and Gerry. They were childhood sweethearts – no-one could imagine Holly and Gerry without each other. Until the unthinkable happens. Gerry’s death devastates Holly. But as her 30th birthday looms, Holly discovers that Gerry has left her a bundle of notes, gently guiding her into her new life without him, each signed ‘P.S. I love you.’
With some help from her friends and her noisy and loving family, Holly finds herself laughing, crying, singing, dancing – and being braver than ever before. Life is for living, she realises – but it always helps if there’s an angel watching over you.
I’ve managed to avoid this book like the plague ever since it screamed onto my radar in 2007. After all, why would I want to read a book about a relationship after one half is dead? Romance is so depressingly dead most of the time these days that I like my books to have a little more spark, chemistry, and two alive people…
However, I finally got over myself and read it – partly spurred on by channel four advertising that they’ll be showing the film this coming Sunday, and it was a bit of a mixed bag for me.
On the one hand the writing wasn’t great, the dialogue was awkward, and the characters sometimes were a little flat, often doing things that were random or unrealistic. Whilst I appreciated Holly was grieving, the repetitive arguments with friends and completely defeatist attitude – often resulting in pages of the book dedicated to her saying over and over again how she couldn’t do it and didn’t want to get up – became a little wearing, and made me want to skip through.

However, I still loved the book. It was touching and moving and made me cry. A lot. It grieved with Holly over her loss, but it also celebrated the life that she had been left to live. The relationship was real, they had arguments and fights, ones that Holly insisted on reliving after Gerry’s death, and beating herself up that she didn’t apologise to him about them, that she wasted time fighting with him in the first place.
It was a terrifying look at death – a subject that everyone will have to face in some form or another throughout their lives. It looks at the aching loss and complete shut down experienced when your reason for living is gone, and the recovery process involved – and most importantly it doesn’t rush it. It takes Holly a long time to even attempt to get her life back together, and it’s only with Gerry’s help that she does this.
Oh Gerry – any woman who had you would have been one of the luckiest women alive. In fact part way through the book I sobbingly told my Mum that there were only about five men in the world that were like that, and most of us never stood a chance. Depressing, but still nice to be able to read about that level of attachment, devotion and completely consuming love. The only thing I didn’t like about the notes was their brevity. In the film they are much longer reminisces of memories and times they shared. In the book they’re short notes with barely a few lines, usually with an instruction along with the P.S. I love you… I would have liked a little bit more, but then I can see how it worked better in the film to lengthen them.
Regardless, the notes were beautiful and truly helped to capture the essence of the relationship they shared, despite the fact that Gerry was dead. After reading I feel sad and a little empty, but uplifted as well. Love exists in the little things, and sometimes it’s easy to forget.
I enjoyed the book, but I’m not desperate to go out and read Cecelia Ahern’s other books – but I have a feeling this will be one I come back to when I need to be reminded that life goes on, and with time heals all wounds – or just when I need a good cry.
Posted by Rosy at 08:04