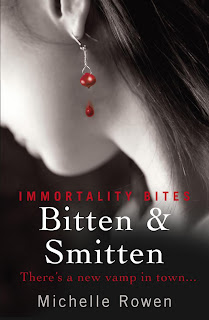 Blind dates can be bad, but Sarah Dearly's date is a true contender for worst ever. His neck nibbling didn't just leave a bruise; it turns her into a vampire -- and the newest target for a pack of zealot vampire hunters. With her date now their latest victim, Sarah runs for her immortal life -- straight into Thierry de Bennicoeur, a master vampire who is just a wee bit suicidal. Thierry can't resist a damsel in distress and agrees to teach Sarah how to live the vampire life if she'll help him end his own. But as it turns out, Sarah may be his best reason for living.
I’ve been ill for the last week, and when I’m lying on my fainting couch looking pathetic and pale I need a very specific type of book to see me through; I need fluff, I need wit, I need romance. However, due to The Vampire Diaries being on hiatus for WEEKS I also fancied something paranormal. After all, the last time I had this urge I found Robin Mckinley’s ‘Sunshine’ which makes me think these urges are good things.
So I found this and it told me it had all of the things I had requested. It was good, it didn’t make me shriek and throw it in the air and declare it to be my new best friend, but equally I didn’t just throw it in the air and shriek at it for being bad. It fell rather squarely in the middle.
It was funny – it had some one liners that made me laugh out loud. But it wasn’t funny all the way through; there were moments of brilliance, and some that fell short of the mark. I liked Sarah’s initial struggle to try and fit together her real life and her new shiny vampire existence, and for me that’s where a lot of the humour came from. So when it started to be a little more brooding and angsty, I got a bit bored. Don’t get me wrong, I like brood and angst, but when I’m expecting it, not when I’ve been promised a laugh a minute romance.  There was quite an abrupt shift where it was all a little bit ‘aha I am more evil than you thought (only you probably guessed a little while back) and now I am going to stun you with my confession!’ Or ‘I am not as evil as some people have been making me out to be, but you just didn’t trust me!’
It was still funny and still good, and I have gone out and bought the sequel and am looking forward to it. The first three quarters are well worth reading, but I lost it towards the end, and it just seemed a bit hit and miss. This could have been because my temperature was rising and I was generally a little incoherent, and I will try reading it again at a later date, but it really didn’t wow me.
It just wasn’t what I’d hoped for.
I think part of the non-wowing was to do with the vampires themselves. I love vampire stories because there are these terrible things they have to overcome in order to blend with the human race, and there’s usually some clever way they can do this (cue day light ring, sparkling, dark glasses and umbrellas.) But these vampires really didn’t seem to be afflicted by all that much. They could go out in the sunlight (it did hurt the eyes a little, but not much) and yes they drank blood but they didn’t run around draining people. They had tiny little fangs there were only noticeable up close – and that was about it. I like danger of discovery, and where the people that do discover have a little more at stake (pun very much intended) than they appeared to here.
Whilst I did love Thierry I didn’t feel like we got to know much about him, so it was a bit frustrating for Sarah to suddenly be in love with him. Yes he was hot and sexy and mysterious, but not enough to go killing yourself over. And the other half of the love interest, Quinn, was a bit stalkerish. He broke into her flat and started kissing her and got frustrated when she didn’t want to go out with him. Her reasoning being he’d tried to kill her twice – a fairly good reason in my book.
So there were elements I wasn’t fussed on, and I felt the last quarter of the book wasn’t as tight at the rest, but I still enjoyed it. It was funny and flirty and Sarah was very likeable and real, which helped keep me amused. I’ve already bought the sequel, so I’ll give that a go and see whether it improves my mood.
Posted by Rosy at 00:17