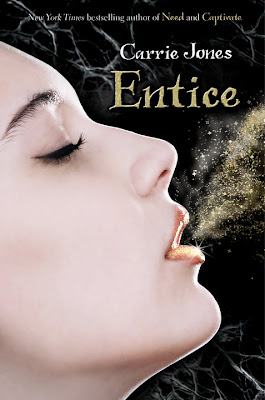 Zara and Nick are soul mates, meant to be together forever. But that’s not quite how things have worked out. For starters, Nick has gone. He’s been taken to the mythical place for warriors known as Valhalla. Zara and her friends might be able to get him back, it’s just not going to be easy. Meanwhile a group of evil pixies is devastating Bedford, with more teens going missing every day. An all-out war seems imminent, and the good guys need all the warriors they can find. But even if Zara and her friends do discover the route to Valhalla, there’s the other small problem: Zara’s been pixie kissed. When she finds Nick, will he even want to go with her? Especially since she hasn’t turned into just any pixie… She’s Astley’s Queen.
As this is the third book in the series, there will be spoilers for all three books below.
I’m not entirely convinced by this third instalment. I adored the first book, and still really enjoyed the second, but ‘Entice’ just didn’t quite do it for me.
Maybe it’s the air of cold, dark depression that exudes from everything; or the failed leads and deaths that pervade the book. In all honesty, until the last sixty odd pages, the book didn’t grab me, and I can’t decide if it was the content and plot, or that my favourite character, Nick, was absent until then.
It all just felt a little too flat and miserable, and I realize that everything couldn’t be resolved too quickly or easily and there had to be disappointments, but it could have played out better. The writing was a little bitty, with random situations occurring with little or no reason. They broke up the plot, broke my concentration and made me frustrated with the book, rather than engage with the story.
When I read the first book I noticed that Jones has a tendency to use short sharp sentences, with very little else to mix up the style at all. Whilst this works well in short bursts, it can become irritating reading a whole book of it. In the first two I noticed but didn’t mind so much as the plot captivated me enough for it not to bother. But it really got to me, distracting from what little there was for me to focus on – which was a shame because I hate when a writing style distracts.
One thing I loved were the little newspaper clippings, twitter and facebook updates and blog posts that headed every chapter. They offered a way to keep the outside world involved and gave an insight into how the rest of the town were coping with the pixie invasion – something that wasn’t always able to be touched upon by Zara.
One frustration for me though, were the deaths. Whilst no major players were killed, a few key ones were. Each death was supposed to come as a big shock, but they were built up to in such a way that you could see what was going to happen, and so the tension and emotion were lost. Considering how heart breaking I found Nick’s death at the end of the second book, I was bitterly disappointed that I not only wasn’t particularly moved by these, but I was frustrated by how silly some of these characters were being, just blindly walking into death traps.

The end did pick up and I found myself enjoying the book a lot more from this point, but there were a few frustrations with this as well. After all the dead ends in the rest of the book (I know a lot was sacrificed to get to this point) it still felt a little too easy, and a little too fluffy if I’m completely honest. I would have liked Jones to shake it up a little bit like she did with the second book – play with the unexpected and don’t go straight for the obvious solution. But yes I’m very pleased that Nick is back, I missed him dreadfully during this book.

I look forward to seeing how the love triangle will play out now that Nick is back in the game, and I’m hoping that the next book will up the ante a little. I still love this series and can’t wait to see how it all turns out, but Entice felt a lot like a filler, filled with disappointments meant to show how hard life can be, and how difficult it can be to keep going. It was a good effort, but it didn’t quite come up to scratch, and I hope that Carrie Jones will be back on form with the fourth book out in 2012.
Posted by Rosy at 14:51