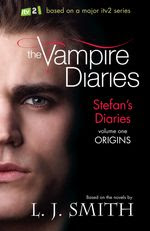 Set during the Civil War, against a backdrop of grand estates, unimaginable riches, and deadly secrets, three teenagers in Mystic Falls, Virginia enter a torrid love triangle that will span eternity.
Brothers Stefan and Damon Salvatore are inseparable until they meet Katherine, a stunning, mysterious woman who turns their world upside down. Siblings turned rivals, the Salvatores compete for Katherine’s affection, only to discover that her sumptuous silk dresses and glittering gems hide a terrible secret: Katherine is a vampire. And she is intent on turning them into vampires so they can live together—forever.


Edit: I've since discovered that Stefan's Diaries are written by a ghost writer - although in the kindle edition that I read there is no indication of this. Therefore I retract my comments about L.J.Smith's writing not being as good as it was in the original Vampire Diaries series. It also explains a lot of the other problems I had with this book. I will leave the review unaltered, but please take it as my problems with the ghost writer's writing standard - not L. J. Smith's.
Woah, woah, woah – hold up for just a minute. Why have we suddenly decided to have Stefan and Damon originate in Mystic Falls? I’m a fan of both the books and the TV series of The Vampire Diaries (as I will tell anyone who looks at me the wrong way, never mind asks.) And I liked the differences – it helped to set them apart, so that I didn’t get grumpy when the TV series deviated from the books. They were both separate and good in their own right. So why has L. J. Smith suddenly decided to write Stefan and Damon not as renaissance Italy gentlemen, but as civil war southern gentlemen? (Continuing with how the series has portrayed them.)
And not only that, she’s taken the dialogue of scenes that are shown in the series, but altered them so they don’t quite match. I feel that if she’s going to take the idea of Mystical Falls and 1864 and use those, she should have at least done it thoroughly.
I’m in two minds, half of me is furious that this isn’t Stefan’s diaries as written by him in Italy, and half of me drooling over the fact I have something else to read that’s connected to The Vampire Diaries during this ridiculously long hiatus.
However, nothing can distract from the very modern language used throughout the book, which seems awkward given the time period this is set in. In fact the writing standard as a whole, which I’ve come to expect to be very high in Smith’s books, is not nearly as polished. The book is filled with potential, and yet it feels like the bare bone of structure of a story. A rushed novella, which could have been a fascinating tale in its own right. It just feels as though without the knowledge you have from watching the TV series, this wouldn’t have held together. Characters aren’t properly introduced, and there’s no depth or meaning or motives behind some of the actions. I felt decidedly let down by it.
However, I am curious to see what Stefan and Damon get up to in their time before returning to Mystic Falls to plague Elena, so I’ll keep reading the series; but in my mind it doesn’t read like some of the prose L. J. Smith has delighted us with in the past – instead it’s like reading some fan fiction for the TV series.

SPOILER AND QUESTION CONTAINED
As I finished reading I was struck with a sudden realization: when Stefan goes back to confront his father towards the end of the book, his father clearly states to Jonathan Gilbert that the whiskey is laced with vervain still. Stefan then drinks his blood, turning him into a full vampire, and then he continues to drink. Surely the vervain in his father’s system would have at least caused him a little discomfort? Thoughts?
Posted by Rosy at 08:43