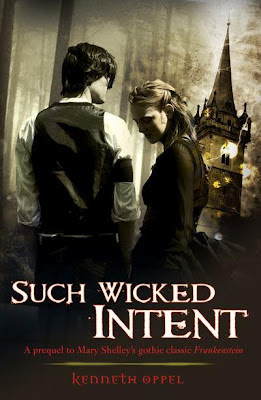 When does obsession become madness? Tragedy has forced sixteen-year-old Victor Frankenstein to swear off alchemy forever. He burns the Dark Library. He vows he will never dabble in the dark sciences again—just as he vows he will no longer covet Elizabeth, his brother’s betrothed.
If only these things were not so tempting.
When he and Elizabeth discover a portal into the spirit world, they cannot resist. Together with Victor’s twin, Konrad, and their friend Henry, the four venture into a place of infinite possibilities where power and passion reign. But as they search for the knowledge to raise the dead, they unknowingly unlock a darkness from which they may never return.

One of my favourite books from last year was ‘This Dark Endeavour’ the prequel of Victor Frankenstein’s life,  featuring a brooding young Victor and his twin Konrad, and an insatiable appetite to discover the darker elements of this world.

It was brilliant, a fantastic mix of the real and the fantastical all packaged up with a ton of gothic horror that left me with goose bumps.
And now we’re treated to the sequel! And I was terrified that it wouldn’t live up to the high standard set by the first book, but it really does.

Oppel has taken all the brilliance of the first book and distilled it into an even more thrilling ride for the second instalment. His imagination continues to completely astound me, with some macabre and brilliant ideas all coalescing into a fantastical whole. The plot is absolutely phenomenal. I wasn’t quite sure how he could surpass the genius of the first book, but he truly does. We get to see a darker, grittier and harder edge to the world that seemed so magical in the first book, everything seems a little more desperate and a little wilder and as a result even more unpredictable. Anything could happen, and does.

There is perhaps not as much character development as I would have liked. Although we do get to see some fascinating moments. Henry really starts to come into his own in particular and I loved seeing him stand up and fight for himself like he didn’t in the first book. We saw hints of it, but it was never fully realized.

It was also good to see some of Elizabeth’s darker side start to creep through, although I didn’t feel as though it had been explored as much as it could have been.  I really hope that there is a third book and that we get to see more of this darker side come through in Elizabeth. She’s a character that fascinates me, and yet at the same time isn’t entirely likeable. None of the characters are exactly likeable, they are all incredibly selfish, and yet they are utterly fascinating as we see them try to muddle their way through what in that time period would have been considered abominations of faith.

Victor comes that little bit closer to the adult we know from ‘Frankenstein’ he’s got a sharpness to him and a desperation that were not so evident in the first book – after all now he has nothing to lose and everything to gain. We see him desperately trying to find the secret to resurrection and creating life.
I loved seeing Victor’s development in this book, we saw some of his darker aspects really come out to play this time in a way that we didn’t in the first book. We delved a little deeper into his psyche and see how the events shaped him, to the point that I really felt like that we were starting to see a little more of his humanity and vulnerability by the end of the book.

Oppel has really set himself up as a fantastic gothic fantasy novelist. He’s taken a concept and idea that people are familiar with and completely turned it onto its head. Victor as an adolescent is even more terrifying that Victor as an adult, there is a wildness to him that make this a thrilling ride right from the first page – definitely a book that I had to read with the light on!

For fans of the first book, this will surpass everything you could have imagined or dreamed of, and for fans of dark and twisting tales, this series is definitely one to read.