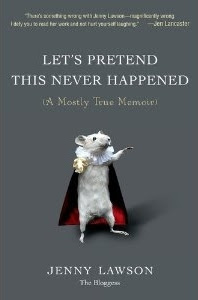 Jenny Lawson realized that the most mortifying moments of our lives—the ones we’d like to pretend never happened—are in fact the ones that define us. In the #1 New York Times bestseller, Let’s Pretend This Never Happened, Lawson takes readers on a hilarious journey recalling her bizarre upbringing in rural Texas, her devastatingly awkward high school years, and her relationship with her long-suffering husband, Victor. Chapters include: “Stanley the Magical, Talking Squirrel”; “A Series of Angry Post-It Notes to My Husband”; “My Vagina Is Fine. Thanks for Asking”; “And Then I Snuck a Dead Cuban Alligator on an Airplane.” Pictures with captions (no one would believe these things without proof) accompany the text.

Dear God you guys, this may be one of the funniest books I have ever read.

“… I prefer to think of it as ‘intellectually challenging and chronically surreal. Like if Memento was a book. About dead dogs and vaginas and puppets made of squirrel corpses.’ You can feel free to use that quote if you’re reviewing this chapter, or if you’re a student and your teacher asks you, ‘What was the author trying to say here?’ That was it. That’s what I was trying to say. That and ‘use condoms if you’re going to have sex, for God’s sake. There are a lot of Skanks out there.’ That’s not really covered in this book, but it’s still good advice.”

That right there gives you a vague idea what you’re letting yourself in for. Jenny Lawson aka The Bloggess is infamous in the blogosphere, and regularly has me in tears from laughing so hard on her blog. I think the story that converted me is the tale of Beyonce the giant metal chicken aka ‘Knock Knock Motherfucker.’
So when I she’d written a memoir (and hell, just look at that cover) I couldn’t resist.

There isn’t exactly a plot, more just a complete immersion in Jenny’s brain, which is an experience in itself. We find out about her childhood, and from there it’s a free for all throughout some of the weirder experiences of her life.

You couldn’t make this stuff up. It’s genius, some of it is thought provoking and she isn’t afraid to grab hold of some harder topics and plunge right in. I was laughing at some points, and others I just wanted to cry and reach through the book and give her a hug.

It’s an incredibly surreal experience, and I did have to read the book in stages, partly to stretch the experience out longer and partly because sometimes I literally couldn’t laugh anymore.

This is a no filter system, no holds barred experience of seeing the world through the eyes of Jenny. Utterly fantastic, completely unbelievable and a brilliant book. Probably not for those who are easily offended as the language kicks off right from the beginning, but otherwise fantastic. And if you’re after the sort of book to get you weird looks on the commute, I highly recommend the audiobook as well, read by Lawson herself.

Seriously guys, pick this one up and prepare to have your mind boggled. Just don’t try to eat or drink whilst you’re reading…

And if you're not yet convinced, go and check out her fantastic blog right here!