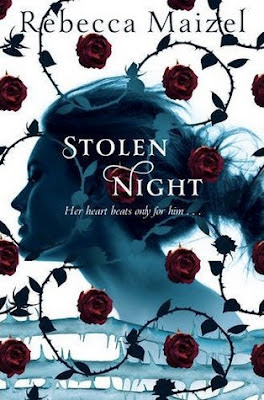 Mild spoilers if you haven’t read the first book ‘Infinite Days’, no major spoilers for ‘Stolen Night’ – nothing much other than what you read in the blurb.

After 500 years as a Vampire Queen a sinister ritual transformed Lenah Beaudonte into a living, breathing teenage girl – a girl with a beating heart, capable once again of human love.
Now Lenah has been presented with an impossible choice: go back through history to before she became the cruel vampire that she once was and undo all her evil deeds, but never meet and fall in love with the darkly gorgeous Rhode. Or continue her life in the present day with Rhode nearby but beyond her reach forever…

Infinite Days was one of my favourite books from last year, and with the number of false hopes and starts as to when Stolen Night would be released, I was on tenterhooks waiting to get my hands on it when it finally graced our shelves at the start of June.

And yet as is so often the case with books that we are desperate for, they have such high expectations to live up to that they never fully come up to what we had imagined.

The clarity and brilliance of the first book was lost in translation between the first and the second . I loved Lenah in the first book, she was strong and independent and determined and quite frankly, a bit terrifying and kick ass. I loved her. She was such a fantastic heroine, trying to balance her light and dark sides and I was really rooting for her by the end of Infinite Days. And then we get to Stolen Night and she’s lost all of that. She’s lost her sense of self and independence and becomes just another heroine who doesn’t seem to be able to function or exist properly without a man. She spends the first two thirds moping over her various love interests. If she managed to balance it with some of the character we saw in the first book I wouldn’t have minded some of the moping, but it bogged down the story until it was barely moving forward at all. I found myself becoming increasingly frustrated with Lenah and her complete inability to get a grip.

The premise also stretched my imagination a little. The parameters of the world had been established in the first book, and then pushed and completely skewed here. It was a bold move and will be a marmite moment for readers, they will either love it or hate it. I was on the not particularly fussed side because I’d lost any grip on reality that this world had established in the previous book. It was frustrating and confusing and I wanted some more establishment or explanation to make it sit right for me. I came around eventually, but it took so long that the book was almost done before I was on board with the story.

As I’ve already touched on the story really takes its time to get going. Eventually we get into kick ass mode again and I fell in love with Lenah all over again, but it felt like it was too little too late. The action takes too long to hit, and whilst there are moments of action earlier on there isn’t enough to really keep the story afloat and moving forward and as a result it gets bogged down in Lenah’s moping.

I really missed the flashbacks to Lenah’s vampire life that we were treated to in the first book as well, I think that was where a lot of the greatness of the first book came from, this balance of the evil queen vampire who is more monster than anything else, with the delicate human she has become. We still do get flashbacks in this book but they aren’t in the same league or as rewarding to the story as they were in the first book.

This felt like a bit of a cop out. It took all the elements that I loved away and left me with a few bits that were ok but didn’t thrill me in the same way.
That said I did still enjoy the book, it does pick up the pace towards the end and the writing is good. I just had such high hopes after the first book that it was always going to be hard to live up to them.

I have a feeling there may be more books to come after this one – the end certainly leaves room for it, and if there are I will look out for them with anticipation to see what happens next. It’s just unfortunate that my initial love and excitement of the first book has been diminished going forward into any further books. However if you are looking for a fresh new vampire book I highly recommend the first book ‘Infinite Days’ as a fantastic read that breathes new life into the vampire genre.