Review: The Magicians by Lev Grossman 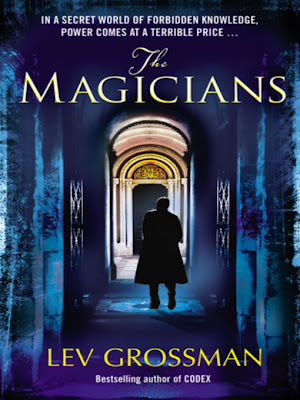 Quentin Coldwater is brillant but miserable. He's a senior in high school, and a certifiable genius, but he's still secretly obsessed with a series of fantasy novels he read as a kid, about the adventures of five children in a magical land called Fillory. Compared to that, anything in his real life just seems gray and colorless.
Everything changes when Quentin finds himself unexpectedly admitted to a very secret, very exclusive college of magic in upstate New York, where he receives a thorough and rigorous education in the practice of modern sorcery. He also discovers all the other things people learn in college: friendship, love, sex, booze, and boredom. But something is still missing. Magic doesn't bring Quentin the happiness and adventure he though it would.
Then, after graduation, he and his friends make a stunning discovery: Fillory is real.

There will never be such a thing as an utterly original book, every book you read will have borrowed elements and moments that you recognise from other books, but to borrow so heavily from a book that whole ideas are border line stolen seems to me to take it a little far. There are elements of Harry Potter and Lord of the Rings scattered throughout the book, some entertaining like gaining entry to the Cottage used to be ‘Speak friend and enter in elvish but then too many people read Tolkien.’ And some less entertaining and more tiresome. But then we come to the crux of what bothered me about the book, the fact that Grossman effectively steals a lot of the Narnia books and sodomizes them. I feel like books I loved as a child have now been tainted. So much of the books seem to have been taken from ‘The Magician’s Nephew’ the first book in the Narnia series, right down to the world of pools that act as transport to other worlds.

Which in a way is kind of what Grossman could have been going for. He takes a series of books that Quentin loves, and then makes them real and possible for him to go into. Nothing will ever live up to his childhood imaginings and delusions. Nothing will ever be as innocent and romanticised as it was originally in his mind and when he first read the books. Grossman is taking that idea and transplanting it onto the reader with C. S. Lewis’ books. Very clever, and I would have been more impressed had the characters and plot lived up to that idea.

Grossman is effectively taking things and turning them on their head. The idea of books that are innocent and beloved, and then being allowed to go into them – of course you are inevitably going to ruin them, they will never live up to your childhood expectations. He also examines the idea of a magical school but at an age when preconceptions of the possible and impossible have formed for most of the students. As a result Quentin who has not had a childhood with magicians is thrust into a world that most of him is programmed to reject. A direct swap from Harry Potter where the students are still children, their preconceptions have not formed to the point that they will see the impossible and reject them.

Elements of the book are fascinating. The adult rejection of the unreal, the dissatisfaction and constant race to find that magic moment where your life will begin instead of living in the moment and enjoying what has been given to you, the disillusionment of childhood fantasies and ideals. All of these combined would have made for a fascinating book, and yet they end up falling completely flat for a number of reasons.

Firstly, there is no real plot or structure to the story. It was more a series of events in the life of Quentin Coldwater. At the start it feels like it will be a book about his foray into the magical world, of his life and studies at Brakebills. But then half the book is gone and he’s already graduated and he ends up having a mid life crisis age 21, and ruining all of his prospects and potentials. Then at the last moment he is saved by the opportunity to visit Fillory, and yet that again is just a series of events with no real purpose or driving force. It felt like several different stories all smushed into one book with little to no direction. I ended up finishing and feeling as though I was taking nothing away. That there had been no point to reading the book – always a demoralising feeling when finishing a book.

The lack of drive behind the book could have been salvaged with a fantastic protagonist, but again this ends up failing miserably. Quentin is so depressing he made me want to shake him. He is never happy, never content. Yes ok this could be shown to be a mirror to the world we live in today, but I like to have a bit of escapism in my books. I don’t mind depression if there is a purpose behind it, a drive or meaning, but just to be depressing for the sake of it makes me not really want to bother with a book. Grossman almost manages to salvage this with Quentin's moment of realisation that his unhappiness is something he brings to himself and his situations, but it felt like too little too late by that stage. It wasn't quite enough to redeem and salvage the remainder of the book for me.

I did like Alice as a character, although there could have been a bit more development, and Josh had definite potential. However they are both lost in amongst the rude, idiotic and downright unlikeable characters that pepper the rest of the book. When they decide to go to Fillory I wanted something, anything, to stop them. The idea of them going in with their war magic and hostile arrogance made with every opportunity to ruin this place made me want to stop reading entirely. I did however, also love this idea of a school of magic similar to university. I liked the set up and the premise and I loved what insight we were given into the magical world and how magic worked – the idea of the hand shapes and movements as opposed to wands, and being able to tell another magician from the over built muscles in their hands was something I thought was a great concept. However these few gems are buried in amongst so much that doesn’t work that they do little to salvage the book.

All in all an attempt at a sarcastic and ironic take on the fantasy genre ends up just being a fantasy book, and not a particularly great one at that. There are some gems hidden in there and it was definitely a book that stayed with me after I finished it, but not necessarily for the right reasons. I think I’d much rather stick with the Harry Potter books and ‘The Night Circus’ for my magic fix.