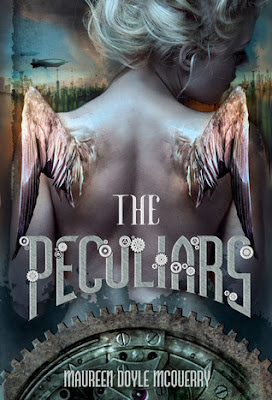 This dark and thrilling adventure, with an unforgettable heroine, will captivate fans of steampunk, fantasy, and romance. On her 18th birthday, Lena Mattacascar decides to search for her father, who disappeared into the northern wilderness of Scree when Lena was young. Scree is inhabited by Peculiars, people whose unusual characteristics make them unacceptable to modern society. Lena wonders if her father is the source of her own extraordinary characteristics and if she, too, is Peculiar. On the train she meets a young librarian, Jimson Quiggley, who is traveling to a town on the edge of Scree to work in the home and library of the inventor Mr. Beasley. The train is stopped by men being chased by the handsome young marshal Thomas Saltre. When Saltre learns who Lena’s father is, he convinces her to spy on Mr. Beasley and the strange folk who disappear into his home, Zephyr House. A daring escape in an aerocopter leads Lena into the wilds of Scree to confront her deepest fears.

I had really high hopes for ‘The Peculiars’ – everything about it appealed to me, from the blurb and the cover to the reviews and snippets of conversation I kept hearing about it. And for the most part it lived up to my expectations, but there were a few things that fell short and knocked it down from five stars to four.

The concept was fantastic and for the most part the execution was as well, what let it down was the inability to decide on one story line to take the characters through. It felt like there were two stories trying to be told. Ideally that would have been split into two books, the first involving Lena and her attempts to discover the secrets at Zephyr House, and the second the escape through Scree. But because both were crammed into one book neither were given the attention they deserved and as a result the book was an odd jumble of the two and never really took off.

I loved the concept, the world building was really good and I could have quite happily read a book twice its length to explore even more of the world. It’s was beautifully constructed but I was a little baffled as to why it was labelled as a steampunk book, as aside from a couple of wacky machines and a dirigible there is absolutely nothing that would tie it to steampunk, no development and construction that affects the whole world with these leaps forward in technology, so I kind of felt a little let down and mislead by that. However apart from that I thought the world building was great.

The narrative was a little uneven, there were some flashbacks towards the start of the novel that suddenly disappear a few chapters in with little to no reasoning behind them. It felt a little jagged and I was left feeling like they had just been shoved in to provide some information for the reader that they otherwise wouldn’t have had, there was no reason or development of these to make them a solid part of the narrative.

I was also a little concerned by some of the ideals and beliefs that Lena holds to. It was a great coming of age story but I felt that some aspects were handled a little indelicately. For example Lena is terrified because she thinks that being a Peculiar means she’ll have no soul, she’ll be unable to help the terrible things she’ll inevitably do, and Peculiar’s are treated as second class citizens. They’re rounded up and sent off to the mines, and they aren’t allowed to own property are just a couple of examples of how this is portrayed. And most are desperate to remove the things that make them peculiar, to stop the abnormalities and fit in as 'normal' people. However at the end of the novel Lena comes to accept her peculiarities not because it makes her strong and equal, but because they make her special. She also signs over her property, her life and her way of earning a living to a man (who yes seems quite nice sure) because she is a woman, a peculiar and is therefore not human or worthy enough to take control of her life, even out in the wilds of Scree where no-one would really know and/or care, and in doing this she is praised by those around her. She becomes completely dependent on this man to look after her, provide for her and not kick her out into the wilds of Scree – this place that should be rights be hers. It just seemed a little too close to the line. Lena is forward thinking and strong for a lot of the novel and it really felt like this undermined her. It was also the way that women are portrayed as weaker and subservient to the male characters, and all of the male characters, including Jimson are arrogant, cocky and completely despicable at some points. It left me with a bit of a nasty taste in my mouth when I finished, which is a sham given how well everything started out.

It took a very long time to really pick up speed and get going, which wouldn’t have been too much of a problem if the two storylines weren’t battling for supremacy in the second half of the book. All in all there were some great ideas and some lovely writing and concepts, but a lot of it ended up being obscured by some slightly twisted ideals and portrayals and a plot that was so tangled around itself that it never really took off.