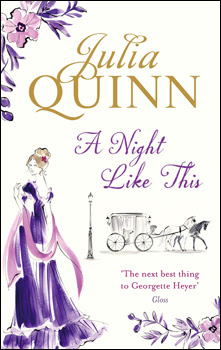 Anne Wynter’s job as governess to three highborn young ladies can be a challenge – in a single week she finds herself hiding in a closet full of tubas, playing an evil queen in a play and tending to the wounds of the oh-so-dashing Earl of Winstead. After years of dodging unwanted advances, he's the first man who has truly tempted her, and it's getting harder and harder to remind herself that a governess has no business flirting with a nobleman.
Daniel Smythe-Smith might be in mortal danger, but that's not going to stop the young earl from falling in love. And when he spies a mysterious woman at his family's annual musicale, he vows to pursue her. But Daniel has an enemy, one who has vowed to see him dead. And when Anne is thrown into peril, he will stop at nothing to ensure their happy ending…

I am a massive fan of Julia Quinn’s books, I have to retire to my fainting couch every spring when a new book is released, and then promptly don’t come out until I’ve read it. I know some people whinge about predictable plots, but for me there is something comforting in knowing that the two people who fall in love will ultimately end up together – that true love really does conquer all. Julia Quinn’s books are in fact, Chicken Soup for my Soul.

And yet I was a little underwhelmed by this latest book. There were still the swoonworthy hero’s, the feisty heroines, the drama and intrigue and fluff. The witty banter and fantastic secondary characters. In short, everything I love about the books was present, and yet there was something very much missing for me.

It could just be that I was having an off day when I read this one because I have seen plenty of reviews from others saying that this is yet another fantastic example of Quinn’s writing. And yet something just didn’t quite hit home for me. If I had to pin point it I would probably say that the governess and Earl storyline slowed everything down a little bit. Instead of the drama and intrigue and waiting for each other to realize they’ve actually fallen in love, we had the love (or lust/like/staring dreamily into each other’s eyes) right from the start, and what followed was a novel full of descriptions of why they liked each other, and Anne repeatedly pointing out that an Earl and a Governess is just not allowed. It meant that everything became very bogged down over this one point, and the plot never really got going. Yes ok there are some very high tension scenes as we race towards the end of the book, but they weren’t quite enough to pull it up for me.

It still has all the makings of a great JQ novel. There are some hysterically funny moments, beautiful touching moments and edge of your seat high tension. There are the falling in love moments, and the bits where it’s all going wrong moments, and the fluff. But at the heart are the usual JQ hero and heroine who fall in love against the odds and would move heaven and earth to be with each other. Her books give me hope for true love, for romance, and that Mr Right is waiting out there somewhere.

Not every book an author writes is going to hit the right notes for everyone, and sadly I think that ‘A Night Like This’ is that book for me and Quinn. However I still recommend it as a great read, but if you want a fantastic example of Quinn’s writing I will always go with ‘Romancing Mr Bridgerton’ and ‘It’s In His Kiss’ – earlier work but utterly brilliant examples of why Julia Quinn is one of the leading regency romance authors in my eyes, and why I will still go back to her books time and time again.