Huge thanks to Harriet at Random House Children's Books for being awesome and sending me a copy to review. 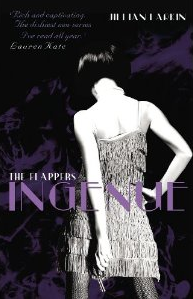 Power... love... scandal...
There’s never enough to go around.
In the city that never sleeps, Lorraine Dyer is wide awake. Ever since she exposed Clara Knowles for the tramp she was—and lost her closest confidante in the process—Lorraine has spent every second scheming to make her selfish, lovesick ex–best friend pay for what she did. No one crosses Lorraine. Not even Gloria.
True love conquers everything—or so Gloria Carmody crazily believed. She and Jerome Johnson can barely scrape together cash for their rent, let alone have a moment to whisper sweet nothings in the dark. And if they thought escaping Chicago meant they’d get away with murder . . . they were dead wrong.
Clara was sure that once handsome, charming Marcus Eastman discovered her shameful secret, he’d drop her like a bad habit. Instead, he swept her off her feet and whisked her away to New York. Being with Marcus is a breath of fresh air—and a chance for Clara to leave her wild flapper ways firmly in the past. Except the dazzling parties and bright lights won’t stop whispering her name…
INGENUE is the second novel in the sexy, dangerous, and ridiculously romantic Flappers series set in the Roaring Twenties… where revenge is a dish best served cold.

I absolutely adored the first book in this series ‘Vixen’ when it was released earlier this year. And now, six months later I’ve finally got to see what happens next.

However the second book, whilst still showing a solid base and instalment in the series, had lost a little of its shine in the move from Chicago to New York. Whilst all the characters were intertwined in their small circle in Chicago, no one really meets each other (despite being in the same city) until the last section of the book, which left the first part of the book a little choppy and disjointed as we skipped back and forth between the characters and their very different lives.

The plot continued to move logically and coherently, building on the foundations that had been set up in ‘Vixen’ but sadly the characters did not always follow the same logic. There were abrupt moments where behaviour felt contrived and forced, especially with Clara, who still remains my favourite character of the book, and yet she swung back and forth so abruptly and became so selfish with her writing that I found has actions and motives a little less cohesive than they were in the first book. I still loved her story, and I really liked seeing her development and I’m really excited to see where this set up takes her to in the final book in the trilogy ‘Diva’ but I wasn’t as enthralled on the ride as I thought I would be.

The most natural storyline really went to Gloria and Jerome. I was thrilled with their relationship and how Larkin had handled it, so it was great to see this natural progression between the two of them as they’re forced to face the consequences of their actions. Larkin really plays on and highlights how taboo their relationship was, detailing the extreme lengths they have to go to with the flat, the problems with a white singer and a black piano player trying to get work and the tension and strain this puts on their relationship.
It was devastating at times, and uplifting at others, but I really feel that their story is the most fascinating and well concocted of the series. I can’t wait to see where Larkin goes from here with them and what happens next.

Lorraine continues to be a bit of an enigma. She swings back and forth so rapidly between being incredibly childish and selfish, to actually being half decent. I can’t really seem to get a handle on her, and I’m not quite convinced by her yet. If there was some foundation to her character, other than the fact that she’s selfish I find her storyline a little more interesting, but as it is I still haven’t warmed to her in the slightest.

However, with the final events that unfolded in this book she’s in a solid place to really take off in the final book and I really hope that we get to see her grow and develop and mature into the woman that we keep seeing glimpses of.

Ingenue is still a very good book. It’s a good instalment in the series, progressing the story along and setting up a great foundation for the final book in the trilogy. Sadly it just didn’t quite sparkle for me in the same way as the first book, but I still highly recommend the series and cannot wait to see what happens next.