Review: Before I Wake by Rachel Vincent 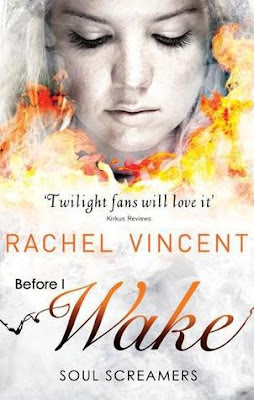 Huge thanks to Mira Ink for sending me a copy to review.

I died on a Thursday-killed by a monster intent on stealing my soul. The good news? He didn't get it. The bad news? Turns out not even death will get you out of high school...  Covering up her own murder was one thing, but faking life is much harder than Kaylee Cavanaugh expected. After weeks spent "recovering," she's back in school, fighting to stay visible to the human world, struggling to fit in with her friends and planning time alone with her new reaper boyfriend. But to earn her keep in the human world, Kaylee must reclaim stolen souls, and when her first assignment brings her face-to-face with an old foe, she knows the game has changed. Her immortal status won't keep her safe. And this time Kaylee isn't just gambling with her own life...

Kaylee has grown so much over the course of the series. She smart and strong and desperately loyal to those she cares about. You’d think she’d be irritating with all of these good and selfless qualities, but actually she just remains one of my favourite heroines. It was heart breaking to see her try to come to terms with her death, with the barrier and differences that now separate her from her friends and family, and to deal with the abuse and heart ache from most of those so called friends following her incredibly traumatic death.

My only real complaint was that her death and the trauma that must have induced wasn’t fully explored I didn’t feel. We did get touches of it, particularly at the start of the book and from her Dad and Tod as well, but the lack of emotional response from her friends was shocking. I actually found that really hard to deal with on Kaylee’s behalf. To see how she fights for them and protects them and does everything in her power to save the day/situation/world and to see how she has grown and developed and overcome such horrific adversities (such as her own death) is just amazing to see. It’s turned her into a truly remarkable character, one that I will love coming back to again and again.

Speaking of remarkable characters, can we take a moment to just appreciate the sheer awesomeness of Tod?
He’s funny and sweet and kind and would actually do anything in the world to protect Kaylee. Which is more than we can say for some of the others… It was so good to see him get his chance to shine, and to see more of his character and discover more about him. He’s been such a fascinating character right from the start and I’m so glad we’re finally getting to see him shine.
And to see the hot make out scenes. Those are good to. Oh man Tod is so on my list of fictional boys I’d like to date.
And strangely the relationship and the foreverness doesn’t send me screaming for the hills as some others do. This feels natural – they’ve come to be friends, to care for each other, and to grow beyond that into something more. It was organic and believable and as a result I am well and truly on Team Tod & Kaylee. Taylee? Kod? I think I’m going to go with Team Kod.

It was great to see a new character make an appearance. Luca was a breath of fresh air and I can’t wait to see more of him and his abilities. Of course the added bonus of Luca is that we finally got to see a bit of a different side to Sophie, which has been a long time coming and I am so glad she’s included more now and we might get a chance to see her get a bit kick ass instead of being bitchy.

Nash really still got on my nerves, which is unsurprising given how I’ve felt about him for the last two books. His constant whining that he hated Kaylee for framing him for her murder (when she does manage to sort that and only did it in the first place to save the lives of two friends) was a little irritating to say the least. I am fascinated that Vincent has managed to create a character that I loved so much in the first two books, and then do a complete flip round on him to highlight all the negative elements of his personality. They were always there beneath the yummy exterior, it’s just how they’re coming to light now. It’s an incredible feat, and one I applaud her for – it certainly threw me as I watched him change over the course of the series – but unfortunately it doesn’t make me like him anymore.
I do however hope that there is still time for him to have a little redemption in the final book in the series.

Speaking of characters that make me want to beat my head against a brick wall, Sabine and I are still having a bit of a love hate relationship. I think she’s incredibly strong, and I admire her and really feel for her with some of the more emotional elements of her personality, but at the same time I still find her a little difficult with her constant blame placement on Kaylee, when Kaylee has actually done nothing to Sabine.

With the final book looming you can expect some pretty terrifying stuff to go down, and Vincent more than delivers. We still get the funny and fluffy moments, but they’re mixed in with the horrifying and downright scary ones too. Tough to imagine given how terrifying the whole series has been, but Vincent really ups the ante, and I was left gaping at the book when I reached the end. I was completely in shock, but it sets things up brilliantly for the final book in the series which I am now even more desperate to read.