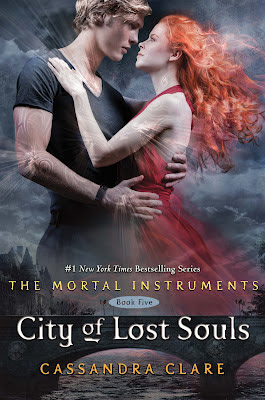 The demon Lilith has been destroyed and Jace freed from captivity. But when the Shadowhunters arrive, they find only blood and broken glass. Not only is the boy Clary loves missing, so is the boy she hates: her brother Sebastian, who is determined to bring the Shadowhunters to their knees.
The Clave's magic cannot locate either boy, but Jace can't stay away from Clary. When they meet again Clary discovers the horror Lilith's magic has wrought - Jace and Sebastian are now bound to each other, and Jace has become a servant of evil. The Clave is determined to destroy Sebastian, but there is no way to harm one boy without destroying the other.
Only a few people believe that Jace can still be saved. Together, Alec, Magnus, Simon, and Isabelle bargain with the sinister Seelie Queen, contemplate deals with demons, and turn at last to the merciless, weapon-making Iron Sisters, who might be able to forge a weapon that can sever the bond between Sebastian and Jace. If the Iron Sisters can't help, their only hope is to challenge Heaven and Hell - a risk that could claim their lives.
And they must do it without Clary. For Clary is playing a dangerous game utterly alone. The price of losing not just her own life, but Jace's soul. She's willing to do anything for Jace, but can she still trust him? Or is he truly lost? What price is too high to pay, even for love?

Whilst my initial reaction to ‘City of Fallen Angels’ was to love that we had another book in the series, the further I got from it the more I realized there were so many aspects that didn’t work for me until I was left feeling a little less than enthusiastic about ‘City of Lost Souls’. It wasn’t that it wasn’t a good book, it was still a great book, and Cassie Clare still remained one of my favourite authors after reading it – it just didn’t pack quite the same punch I’ve come to expect from her otherwise brilliant writing.

However I shouldn’t have worried, where CoFA was a bit of a let down after the explosive first trilogy in the series, CoLS really worked to pull it back together again. It was tighter, the writing was better, the humour was back and there was infinitely more action that had me on the edge of my seat as I raced through the pages.

Clare is one of those talented authors who consistently proves time and time again just how good she is at what she does. She has this ability to make me fall in love with her complex characters that have grown and evolved over the course of the books, her vast and detailed world building, and the complex history and myths that have been interwoven into the patchwork of Shadowhunter lore. An ability to create a connection between reader and book so that when I open up a new book it feels like I’m coming home. I can identify with the characters, the emotions and impact of some of the things they’re going through. But most of all she creates this brilliant blend of fantasy and reality, so that it really feels as though this world could exist, that I could step through and find myself face to face with a demon, or a vampire, or a snarky Shadowhunter. I love that sense of freedom and escape that I’ve come to associate with her books, and whilst I didn’t experience that level in the fifth book, the sixth has definitely brought it all back into play.

I loved the ever widening circle of characters that the story shifts to centre on, it really gives more scope to the books, and gives the reader a chance to get to know the characters inside and out. I always love more Simon – for me he’s always been one of the best characters in the entire series, the arc and growth and the rollercoaster of things he’s had to adapt and deal with, he’s fascinating and funny and yet despite being a vampire, so completely real and human. So I loved seeing him come into his own even more in this book.

I also loved seeing some more of Alec and Magnus. They are a fascinating couple, the power plays and games, but also the complete love and devotion between them as well, so it was really interesting (and heart wrenching) to watch Clare play with this dynamic, to test the limits of the relationship and the individual strengths of Alec and Magnus. It was heart breaking but also so completely real – yes ok the issue coming between them is probably not one that every day couples will have to face, but that doesn’t stop the relationship from being any less real and engrossing to watch play out. And despite the conclusion for them in this book, I have no doubt that it will continue to be one of the most fascinating relationships of the series as we watch them try to work it out.

And yes, I loved watching the new dynamics between Jace and Clary as the stakes got even higher, and their twosome expanded to become a rather terrifying threesome. One of the skills I love best is how Cassie can blur the lines between right and wrong, and can turn even the most twistedly horrifying character into someone who might be redeemed at times. It’s a skill that left me with more than a few soft moments for Sebastian – for all of his flaws – and I really hope that we get to see a few more facets of Sebastian in the final book.

The book is darker, there are some more horrifying moments, some truly hard to read moments and some completely gut wrenching moments. I really hope this is an indication of where the final book is going, because this slightly darker turn definitely brought some fascinating elements out to play that I want to see more of.

I’d also love to see more of this shift away from Clary and Jace, and more of the supporting characters coming into their own, and of course, some happy endings after all the blood and guts and gore would be lovely to…

So I can safely say that I’m really looking forward to the conclusion of the series. City of Lost Souls has definitely upped the ante and the pace and I cannot wait to see where we go from here.