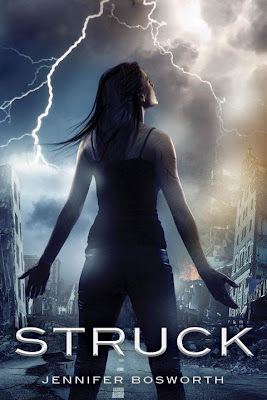 Mia Price is a lightning addict. She's survived countless strikes, but her craving to connect to the energy in storms endangers her life and the lives of those around her.
Los Angeles, where lightning rarely strikes, is one of the few places Mia feels safe from her addiction. But when an earthquake devastates the city, her haven is transformed into a minefield of chaos and danger. The beaches become massive tent cities. Downtown is a crumbling wasteland, where a traveling party moves to a different empty building each night, the revelers drawn to the destruction by a force they cannot deny. Two warring cults rise to power, and both see Mia as the key to their opposing doomsday prophecies. They believe she has a connection to the freak electrical storm that caused the quake, and to the far more devastating storm that is yet to come.
Mia wants to trust the enigmatic and alluring Jeremy when he promises to protect her, but she fears he isn't who he claims to be. In the end, the passion and power that brought them together could be their downfall. When the final disaster strikes, Mia must risk unleashing the full horror of her strength to save the people she loves, or lose everything.

I have been so excited about this book ever since I first heard about it at the Random House bloggers brunch back in January. I immediately got excited (just look at that blurb, you can see why!) and it most definitely lived up to my expectations.

The writing is excellent, fast paced and completely engrossing. I literally couldn’t pick the book down once I’d started it. It drags you in from the first and keeps you hanging until the final page. Made up of short but fantastic chapters I kept convincing myself just one more chapter would be fine, and before I knew it, it was three in the morning and I was nearly finished. The action covers three days leading up to the ‘end of the world’ and the tension never once lets up. It’s fantastically written and really kept me on the edge of my seat and desperate to find out how on earth they could all get out of this alive.

Mia was a really great character – strong, independent, but fiercely loyal and protective of those she cared about I immediately felt for her and her situation. She was a character that I wanted to get to know, to find out what had happened to and to find out more about this crazy world she was trying to survive in.

The world was terrifyingly close to our own, a brilliant play on some of the horrific natural disasters we’ve seen and how the mob mentality can rise up out of that and set up one or two as saviours who will lead us all out of this mess. I really loved how Bosworth explored that idea and how something like that can grow exponentially and spiral out of control. The different factions that can rise and the different people desperate to gain power; it was fascinating.

I would have liked to see a bit more of Jeremy, to find out a little bit more about him. We do get a lot of history peppered throughout the book, but there were some moments where I didn’t feel entirely convinced by him. I wanted to see a little more of him and Mia interacting and getting to know each other – not just their fantastic chemistry. But on the other hand the fast pace of the novel doesn’t exactly leave room for soul searching and life stories – I just would have liked a little more slotted into the book with him and Mia. The same goes for some of the other secondary characters. They were really well constructed, and really leapt off the page right from the start, but there was so much more about them that I wanted to know, backstory and information and just more of them. It’s a mark of well written they were. I’m curious to see if this is a standalone or the start of something bigger, and if it is a series I’d love to see more of the secondary characters and get to know them a little better because there was so much more to them, backstory to the Seekers that I would love to know.

‘Struck’ is an absolutely fantastic debut novel and marks Jennifer as an author to watch. If this is the standard of her first outing I cannot wait to see what she comes up with next – I have a feeling that it is just going to get better and better.