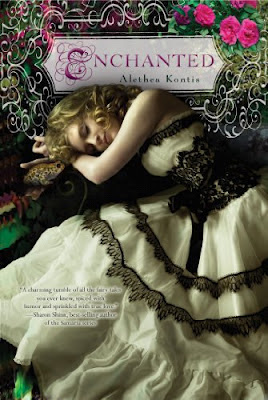 It isn't easy being the rather overlooked and unhappy youngest sibling to sisters named for the other six days of the week. Sunday’s only comfort is writing stories, although what she writes has a terrible tendency to come true.
When Sunday meets an enchanted frog who asks about her stories, the two become friends. Soon that friendship deepens into something magical. One night Sunday kisses her frog goodbye and leaves, not realizing that her love has transformed him back into Rumbold, the crown prince of Arilland—and a man Sunday’s family despises.
The prince returns to his castle, intent on making Sunday fall in love with him as the man he is, not the frog he was. But Sunday is not so easy to woo. How can she feel such a strange, strong attraction for this prince she barely knows? And what twisted secrets lie hidden in his past - and hers?

I’m in a very fairy story/fantasy mood at the moment – something about work being atrocious beings out the escapist in me… So I’m immersing myself in all of the retellings and new spins of fairy tales that have suddenly hit our shelves (and screens. If you haven’t seen ‘Once upon a Time’ yet, I highly recommend it.)

And so Enchanted cropped up on my list, with nothing much to recommend it other than a cover with a girl and a frog on it, and a blurb that talked about Sunday and her six other sisters (also named after days of the week.) It wasn’t much, but it was intriguing.

And for the most part it lived up to my expectations. I loved Sunday and Rumbold both together and individually. I didn’t feel as connected to Rumbold as I did to Sunday, or perhaps it was simply that I found Sunday’s story more interesting than Rumbold’s. It felt like Sunday’s flowed whereas Rumbold’s was very stop/start.

I absolutely adored Sunday’s family. It took a little while to truly recognise and identify each of her siblings and slot all the different bits of information about them together – to start with they just merged together, but once they separated out they were fantastic.

I loved all the different tales interweaved together – some only getting a passing mention like Snow White and the apple, and the Princess and the pea. Some weren’t there at all which I was quite sad about, stories like the twelve dancing princesses, and then there were others like the princess and the frog, jack and the beanstalk that took more of a centre stage. Intermingled with a whole host of new stories that blended together seamlessly. I loved it, it appealed to me on so many levels. The light and elegant story telling, the host of tales and characters interwoven, the humour and magic and the dancing, dresses and fantastic balls – not forgetting nail biting adventure.

There were a few blips along the way – some passages didn’t really read right, so that I had to go back and re-read them several times before they actually made any sense. There were several moments of witty banter between the male characters, which was great, except that it felt like banter meant no furthering of the plot, so there’d be some banter and not much happening and then they felt they had to go off and do something. There were some moments of slightly strained storytelling where I didn’t really feel that all the threads were quite meshing together as they were intended – they slipped in with the passages that were a little awkward.

Perhaps my biggest grievance though was that some of the most important scenes were only referred to in hindsight. When Sunday and her family find out about some of their strange abilities the scene is glossed over, and we find out about them in a very off hand manner when two of the characters talk about it later. It felt like the author almost didn’t know how to write that scene, so skipped over it, and that was incredibly irritating. It felt like it would have been a really important scene with a lot of development for a lot of the characters and I felt cheated to have been denied it.

On the whole though I absolutely adored it. It was light and fresh and took a new spin on old fairy tales and wove some together that I never saw coming. It was very well done and incredibly enjoyable and will definitely be a book that I revisit again and again when I fancy some light fairy tale escapism.