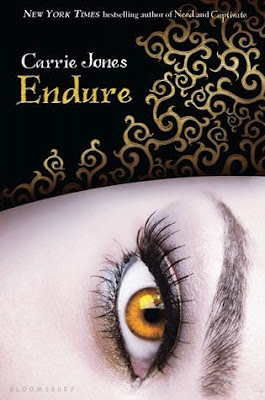 Huge thanks to Bloomsbury for sending me a copy to review
Release Date: 10th May 2012

Zara is at the center of an impending apocalypse. True, she’s successfully rescued Nick from Valhalla, but it simply isn’t enough. Evil pixies are ravaging Bedford, and they need much more than one great warrior; they need an army. Zara isn’t sure what her role is anymore. She’s not just fighting for her friends; she’s also a pixie queen. And to align her team of pixies with the humans she loves will be one of her greatest battles yet. Especially since she can’t even reconcile her growing feelings for her pixie king…
Unexpected turns, surprising revelations, and one utterly satisfying romantic finale make Endure a thrilling end to this series of bestsellers.

I really wasn’t fussed on the third book in this series, which was a shame given how much I loved the first two books, so I went into this final instalment with a little trepidation. I shouldn’t have worried though, it was completely fantastic and an utterly brilliant conclusion to the series.

Unlike the third instalment this was completely satisfying, brilliantly written and I loved it. There were consequences for actions, and character arcs and development and so many twists and turns that I was thoroughly dizzy by the end – but I wouldn’t have had it any other way. It was the ending the series deserved and I was so happy to be back amongst the characters I had come to know and love and to see them take on the evilness once and for all.

I loved how Carrie handled the love triangle – so often they are handled badly and leave the reader feeling put out and frustrated with the conclusion, but I was completely satisfied with how everything played out. I think in part because she truly let actions have consequences and Zara didn’t just roll over and pretend nothing had ever happened. It made the relationships and the characters even more realistic.

I think that the mythology played a much better part in this book than it had previously. I was shocked and taken aback by it in the last book – it didn’t feel like it truly belonged and I wasn’t completely convinced by the placement of pixies and Norse mythology side by side, but what it lacked in the last book it completely made up for in this one. They gelled perfectly and complimented each other and I found myself not only believing the combination but really enjoying it as well.

It was a fantastically satisfying conclusion, but it was in no means without fear and terror and completely and utter uncertainty of the outcome – and who would make it through. Once again Carrie showed her skill as a writer and I was on the edge of my seat the whole way through, desperate to find out whether good would triumph over evil, and whether the right people would end up together. I cannot wait to see where Carrie goes next – she has a fantastic gift for blending the real and fantastical and creating brilliantly believable and real characters the we feel for and root for, fight and cry for, and I’m really looking forward to seeing what she turns her hand to next.

Fans of the series will love this final instalment, and those of you who haven’t yet discovered this series? I suggest you hop on the bandwagon and see what all the fuss is about.