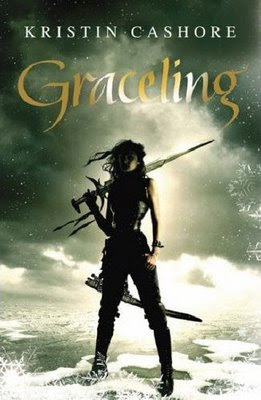 Katsa has been able to kill a man with her bare hands since she was eight—she’s a Graceling, one of the rare people in her land born with an extreme skill. As niece of the king, she should be able to live a life of privilege, but Graced as she is with killing, she is forced to work as the king’s thug. When she first meets Prince Po, Graced with combat skills, Katsa has no hint of how her life is about to change. She never expects to become Po’s friend. She never expects to learn a new truth about her own Grace—or about a terrible secret that lies hidden far away . . . a secret that could destroy all seven kingdoms with words alone.
With elegant, evocative prose and a cast of unforgettable characters, debut author Kristin Cashore creates a mesmerizing world, a death-defying adventure, and a heart-racing romance that will consume you, hold you captive, and leave you wanting more.

When I first read Graceling several years ago, I didn’t enjoy it. Having re-read it again now I can’t understand how on earth not. Ok yes there is one thing that peeved me ever so slightly, but I don’t understand how that managed to colour my entire perception of the book for years, however I’ll get to that in a moment.

Let’s start with how much I love this book and how irritated I am that my younger self didn’t appreciate how fantastic it was the first time around.
The premise is fantastic – it has a mixture of everything I love in books. We’ve got a strong heroine who is most decidedly kick ass but at the same time completely human and compelling. I found myself drawn into Katsa’s life and caring about how the decisions of those around her impacted her and her desperation to try and make a difference and not be who she perceived herself to be. She was such a complex and emotionally drawn character that I couldn’t help falling in love with her and her story. She embodied everything I love in a heroine, strength, determination, mild pig headedness, but also compassion and love and understanding – even when it hurt and cost her to try and feel and understand for others.

We have a fantasy world that has enough sword wielding and tyrannous Kings to keep even the most bloodthirsty readers happy, a beautiful, tumultuous romance to sweep everything along and a terrifyingly real cause to fight for.
It was that beautiful blend of everything in a seamlessly brilliant story that sometimes comes out of nowhere and embraces you in its brilliance, and for a debut novel this is always particularly stunning and exciting, because it means that chances are the author is just going to keep getting better and better, and that is definitely exciting.

We have a host of secondary characters that were just as fascinating and intriguing as Katsa herself. I was very aware that all of my perceptions of them were going to be coloured by how Katsa felt about them, so I'm particularly looking forward to seeing some of them from other view points in later books. I fell in love with Po - he was just so brilliantly handled. A fantastically yummy love interest with so many facets and aspects to explore. I never really wanted it to end- I just wanted to keep on living the Katsa and Po adventures for the next few months...

I loved this idea of the Graces - of them being a mixed blessing and not just for truly awesome things like Katsa and Po's - to be able to hop on one foot without ever getting tired, or be able to eat entire pies in one go... It mixes it up so that it isn't this whole new race of super heroes, it makes it more human, more of a mixed bag. And the idea of them belonging to the King, of never having that freedom for themselves and to be used as tools their whole lives... I found the premise absolutely fascinating and I want to find out more over the coming books to sate my curiosity about this fantastic idea.

The one thing that peeved me the first time, and only mildly irritated this time, was Katsa’s realization of her feelings for Po. It was building so beautifully, and then in the space of a paragraph she suddenly realizes that she loves him. I think I’d been reading a lot of books that went down the insta love route the first time I read this, and that coloured my perception so that all it took was that and I ended up dismissing the book. However this second time through, yes it niggled a little bit, but it didn’t grate on me nearly as much as I was anticipating. It was a lot more subtle than I remembered, and I think I find it even less sudden having now seen the development of Katsa and Po’s relationship throughout the rest of Graceling and now into Bitterblue.

I fell in love with Graceling in a hard and sharp kind of way that I wasn’t expecting at all. It very quickly not only proved itself but found a way into my favourite books of all time and my bookshelf of favourites. It was poetically beautiful, fresh and invigorating, terrifying and stunningingly written. It surprised me and drew me in and made me wonder why on earth it’s taken me so long to get round to reading it again – and on that note, why on earth haven’t I gone on to read the second book in the series ‘Fire’ yet? It’s on my bookshelf waiting, and I think I know precisely what I’m going to next…