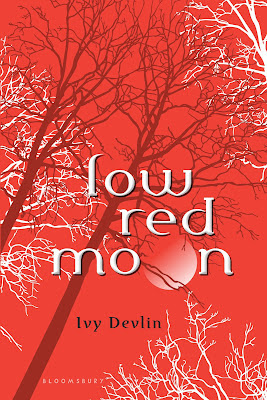 The only thing Avery Hood can remember about the night her parents died is that she saw silver—deadly silver, moving inhumanly fast. As much as she wants to remember who killed them, she can’t, and there’s nothing left to do but try to piece her life back together. Then Avery meets the new boy in school—Ben, mysterious and beautiful, with whom she feels a connection like nothing she’s ever experienced. When Ben reveals he’s a werewolf, Avery still trusts him—at first. Then she sees that sometimes his eyes flash inhuman silver. And she learns that she’s not the only one who can’t remember the night her parents died.Part murder mystery, part grief narrative, and part heart-stopping, headlong romance, Low Red Moon is a must-read for teen paranormal fans. As breathless as Twilight and as spooky as Shiver, this is a book to be devoured in one sitting—by an acclaimed YA author making her paranormal debut under the pseudonym Ivy Devlin.

I am a terrible magpie. I love shiny things, I love pretty things, and a good cover is always going to draw me to a book. So when I saw the cover for ‘Low Red Moon’ I was quite taken with it – it practically glows, it's much shinier than the picture gives away. And the premise looked interesting, an actual murder mystery thrown in with werewolves and romance?
But sadly, the old saying proved true. Don’t judge a book by its cover. Well, at least not this time.

I was really disappointed with this one. It was flat, I never connected with the heroine. All her talk about being grief stricken but it was never shown, they were just words constantly repeated. The love interest takes insta-love to a whole new level. I like build up, I like spark, hell I like friendships before we start leaping into all this ‘oh he is the love of my life, I shall perish without him!’ stuff. I like to actually feel something for the guy, but the biggest problem was that the characters had no development. They remained as they arrived and unfortunately there wasn’t enough space in the novel to truly explore and develop them.

I was expecting a murder mystery and what I actually got were some half memories of silver, oh and some blood. That was it. There was no trail to track down and discover the murder, it just kind of happened. There was no suspense, again no development and it ended up being a let-down.
There was none of the beauty and lyrical prose I had been led to believe I might find in this book. No characters that I sympathised or even truly liked. There was no development, no real arc and most definitely no murder mystery. It’s all very well picking someone who committed the crime that you’d never expect, but there have to be clues, there has to be build up, you have to sweep the reader up on a thrilling and involving journey as they piece together the mystery – otherwise the reader remains emotionally detached and un-invested.

But the thing that aggravated me the most? The idea that every time the word ‘moon’ was printed, it should be in red. Now the idea of using colour in text in books intrigues me, it’s not something I’ve seen much of. But in a book like this where moon is used far too frequently, and to take it so far that the word ‘moonlight’ only the first half is in red is downright irritating. It ended up distracting me and providing an itch I really couldn’t get rid of every time it cropped up.

So all in all, not the best book I’ve come across this year. The book, the writing, the execution none of it came together to provide a satisfying read, and has put me off werewolves for a little while too…