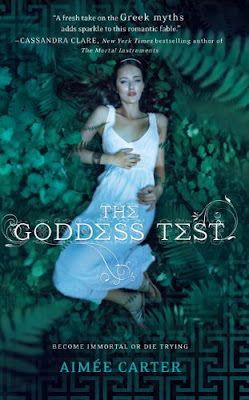 Huge thanks to Becky at Mira for sending me a copy to review.


It's always been just Kate and her mom—and her mother is dying. Her last wish? To move back to her childhood home. So Kate's going to start at a new school with no friends, no other family and the fear her mother won't live past the fall.
Then she meets Henry. Dark. Tortured. And mesmerizing. He claims to be Hades, god of the Underworld—and if she accepts his bargain, he'll keep her mother alive while Kate tries to pass seven tests.
Kate is sure he's crazy—until she sees him bring a girl back from the dead. Now saving her mother seems crazily possible. If she succeeds, she'll become Henry's future bride, and a goddess. If she fails she’ll never see her mother again…

This is a book that I kept on meaning to read but never managed to get round to, but with the release of the second book in the series ‘Goddess Interrupted’ looming later this month, I thought it was about time to find out what everyone else has been shrieking about with this one.

And I completely agree with all the good comments! I really loved the fresh idea and narrative. It captivated me thoroughly and pulled me right in. Kate was a really great heroine, just the right amount of disbelief but coupled with a strong sense of self and will, and a desire to look after and protect the people she loves. I found it really easy to get be pulled into the story because I liked Kate so much, I sympathised with her situation and I was rooting for her right from the start.

Henry was a bit of a mixed bag for me. On the whole I liked him, but I would like to see more of his character and personality come through in the next book. I felt that he remained a bit aloof and distant – although in a way that was because of the tasks, but at the same time it left me feeling a bit stumped over the romance. It never seemed to really come to fruition, and we don’t see enough of Kate’s feelings over time to grow into it with her – although it didn’t hit the bounds of insta love. However I do want to see more of the relationship develop in the next book – in fact I’m quite excited and really looking forward to it.

There were a few points that weren’t entirely clear. A few instances where I felt that things happened for no real reason – they were out of place and a bit out of character, and I would have liked a little more explanation at the end of just how much had been set up for Kate and how much happened purely by coincidence. I know that Kate does ask at the end but I didn’t feel it was particularly clear.
The other thing that I would have liked a little more of was which people were which Gods. If you feel like cheating then there is a list at the back of the book to keep tabs on, but other than Henry and a couple of others (I won’t spoil here, but if you haven’t read the book yet why on earth not?!) it really isn’t clear who is who. Now maybe I’m just not as brushed up on my Greek myths as I thought I was, but I found it really hard to work out who was who, and some were just downright strange choice. I really hope that we get a little bit more of the other Gods characters come through in the next book, and we get to see a bit more of the actual Gods themselves.

On the whole though I really enjoyed the book – yes I had some niggles but they were minor ones comparatively and it’s only because I was enjoying it so much that they seemed to stand out more. If you’re after a fresh take on the myths and legends of the Greeks, or just a fresh burst of supernatural in the werewolf and vampire infested young adult book shelves, then I highly recommend the Goddess Test. Nail biting, heart wrenching, romantic and very well written, it will keep you on your toes right to the end.