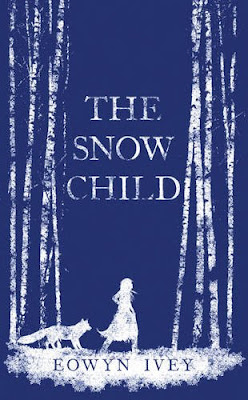 Alaska, 1920: a brutal place to homestead, and especially tough for recent arrivals Jack and Mabel. Childless, they are drifting apart--he breaking under the weight of the work of the farm; she crumbling from loneliness and despair. In a moment of levity during the season's first snowfall, they build a child out of snow. The next morning the snow child is gone--but they glimpse a young, blonde-haired girl running through the trees. This little girl, who calls herself Faina, seems to be a child of the woods. She hunts with a red fox at her side, skims lightly across the snow, and somehow survives alone in the Alaskan wilderness. As Jack and Mabel struggle to understand this child who could have stepped from the pages of a fairy tale, they come to love her as their own daughter. But in this beautiful, violent place things are rarely as they appear, and what they eventually learn about Faina will transform all of them.

This book was utterly gorgeous, from the cover, to the story. The UK hardback is the sort of book that I will sit and stroke and admire for hours – the snowflakes! So the book was off to a good start already, and I’d heard some fabulous things already that had me very excited when I picked up a copy. And I wasn’t disappointed.

Ivey’s writing is absolutely perfect for a fairy tale retelling such as this. Bleak, lyrical, and utterly gorgeous she captures the isolation and desperation of Alaska, and the characters perfectly. Every character leapt off the page fully formed as I read, and I found myself savouring every moment, every paragraph and lyrical sentence.

Cut down into short segments, moments and events, conversations that thread together to pull the story along at a quiet pace meant that it was the perfect book to read at night. I drew it out, never wanting it to end, and read a few pages each night, disappearing back into Jack and Mabel’s world as much as possible.

For a first novel it was absolutely stunning. A beautiful blend of compelling and well-constructed characters, lyrical writing, and incredible technique. Ivey walks a fine line between fiction and reality, using different techniques to make Faina seem both very real and entirely magical. I was particularly taken with the dialogue with Faina – if you’ve read it go back and have another look. Not once are speech marks used when Faina is around, which gives every encounter a very personal, almost in the mind approach to the conversations. It was fascinating and I loved not actually knowing who or what she was.

That not knowing just adds to the magic of the story and whereas normally I like to have all of my questions answered, this was one of the few times where I liked being left in the dark to make up my own mind.

I loved watching so much of the characters lives – of Jack and Mabel as they grew older together and learned to love each other all over again in the harsh and wild beauty of the self imposed isolation. There is such a rift between them at the start of the book that watching them heal that and try to find each other again was actually one of my favourite aspects of the story. It isn’t just a fairy tale with a beautiful dusting of magic, it’s a tale of real people in almost impossible situations and how they find each other, and rebuild their love and try to find some joy in the world again – and that was what really got me. I loved watched as Faina grew from a child into a young woman, and Garrett who started out as a surly young man and grows into such an intriguing man. And Esther who pretty much barrelled straight out of the page at me. It’s such a wide variety of characters and each of them is so incredibly crafted and rounded, they fairly leap off the page and flesh out the story, which is an incredible skill, particularly in a debut novel.

A beautiful sprawling tale, this is a book that I will come back to again and again. Beautiful, heart breaking, and utterly engrossing I found myself completely captivated by it and it’s now places firmly on my list of favourites. For fans of Erin Morgenstern or Ali Shaw, this is a definite must read, and for anyone else who wants a little bit of magic mixed into their day.