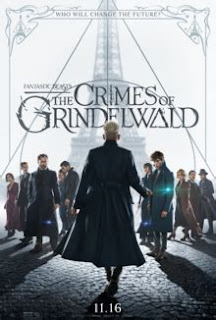 I loved Fantastic Beasts and Where to Find Them - it was a fresh and fun filled romp, in a way that the Potter films hadn't been allowed to be in some time. We got a sense of playfulness! We got to see more of the wizarding world! We got fantastic beasts! But most importantly we got Newt, and my love for Newt deserves its own epic post. (later)

So armed with a fresh re-watch the night before, I went into the cinema excited to see the second instalment. Unfortunately that didn't last long. Even now, several days after watching, I'm still reeling, and not in a good way.

I have a lot of feelings, and a good portion of them are spoiler filled, so be warned, spoilers galore beneath the cut.

Honestly? This film was a hot mess, and the more I think on it, the grumpier I get. My husband and I went in with two different sets of expectations: me, a die hard potter nerd who adores the lore and knows the books inside out. Him, a passing interest in Potter, mostly just interested in watching a good film.
Neither of us came out happy.

Sure it has some incredible visual effects. Yes it was definitely awesome to see more of the wizarding world. Is Newt still amazing? Damn straight. Is Jude Law a truly excellent Dumbledore? Surprisingly, yes. Is the (tiny) touch of having the actors who portrayed young!Dumbledore and young!Grindelwald in the Deathly Hallows films back to reprise their roles here good? Hell yes. That's about all I can come up with that's positive.

This film takes a lot of the canon from the Potter books, and Pottermore extras that J K Rowling has written, and rips them to pieces. It then attempts to vomit out an approximation of a story and fails abysmally. You could watch the first fifteen minutes of the film, leave, come back for the final act, and really not have missed out on much at all. The film is bloated with exposition, non-sensical cuts, and very little plot, favouring overblown CGI sequences over actual coherent development. It takes the characters built in the first film and, in the best cases underuses them, and in the worst, completely wrecks them.

This review was very nearly titled "the women in Crimes of Grindelwald deserved better", because they did. Almost every woman in this film could have been replaced with a lamp. They were there to provide men with something to talk to (Nagini), something to provide some key backstory but otherwise look tragic (Leta), provide a brief cameo at the cost of butchering back story (McGonagall), provide a slight misunderstanding and romantic subplot (Tina), or to have a complete personality change and leave me feeling rageful (Queenie).

Let's talk about Queenie for a minute, because she's been the character who I felt got the worst deal. In the first film we're introduced to her as a kind, gentle woman who is maybe a bit sheltered by her sister, but is by no means an idiot, and is fiercely loyal and filled with love. That's evidenced so many times throughout the film by her actions towards Tina and Jacob. Cut to the second film. She's enchanted Jacob with a love spell, taken him to London without any of his real knowledge or consent, and is declaring that they're engaged and getting married. All without actual knowledge or consent on his part. If Newt hadn't lifted the enchantment how long would she have kept that going? Would Jacob have been enchanted for the rest of his life? Or only until they were married and she was pregnant so he didn't feel he could leave?
How is any of that even remotely okay? How can it be played off as her being in love and cute? If you're struggling to see that, just gender flip that scenario for a minute and think about it some more. I'll wait.

She then spends the rest of the film wandering tearfully around Paris until she's picked up by Grindelwald's henchwoman (hi yet another lamp lady, at least you get a cool hat!) where they have a brief conversation and she thinks that maybe Grindelwald might be onto something because he's suggesting destruction of the old laws so she'd get to be with Jacob properly. Okay, there's not enough character development really, but I'll buy that.

Cut to the end fight scene where Queenie is reunited with Jacob, and seems to have very much drunk the cool-aid on offer, because she wants to join Grindelwald. Only Jacob doesn't want to. And surely she's doing this for Jacob and her desire to be with him? Nope, she's definitely just screaming at him like she's completely lost the plot and going to be with Grindelwald anyway because... reasons of conflict because we have to have someone we care about on his side?... Who even knows anymore.

It is such a viciously stupid destruction of her character and all to provide some conflict in later films. Sure, have one of the "good guys" change allegiance, but have it make sense or be developed enough to not be a complete mind screw.

Maybe if Grindelwald was an interesting and compelling character I'd buy it? Think David Tennant's Kilgrave from Jessica Jones. Instead we have a really bland performance from a problematic casting choice, that drags the film down further. He's not charismatic, he's not diabolical, so far he's barely committed any crimes which the film is meant to be titled for. He's just bland. And boring. And it feels like a backstep on some truly fascinating and nuanced villains in the rest of the wizarding world. Hell, bring back Colin Farrell, he was a villain I could get behind.

But let's talk about that destruction of the canon for a minute. First, the complete annihilation of Professor McGonagall's meaningful backstory. She has such a wonderful complex history that really helps to develop her as a character. But what's the use in that when you could have a completely meaningless throw away moment of her appearing in a film set eleven years before she was meant to have been born as a teacher, that is basically a fan servicing easter egg that will actually just frustrate fans to no end?

But that pales in comparison to the films final twist of the knife where Grindelwald reveals to Credence in the final moments of the film that he is in fact a long lost Dumbledore brother. Now I am firmly in the denial camp, where I'm going to cling desperately to the hope that this is a giant red herring and it's all going to get resolved in the next film. Because if this is an actual real plot point, I may cry. Plus the dates do not add up even a tiny bit. The Dumbledore parents are already dead when Credence was born (according to his birth certificate).
How, when Rita Skeeter was so determined to ferret out all the dirty laundry of the Dumbledore family for her book in Deathly Hallows, would she not have leapt upon the existence of another Dumbledore? This hardly seems like it's going to be kept under wraps in the Fantastic Beasts world, in fact a lot of things that appeared to have been secrets in the Potter verse, are here thrown about as common knowledge. It doesn't make any sense, and it feels like a truly huge ret-con for an 'oh my gosh what a twist' moment that is more likely to frustrate and enrage fans of the original Potter series than leave them excited for the next one.

There's a lot of other frustrations and contradictions going on, but those were the two super big ones, and I may cry if I keep digging into everything that was casually thrown about in favour of 'Fan Service'.

It felt, not even like a giant middle finger to the fans, but instead a blind butchering without actually thinking it through, to aid a cash grab of a film. I love the Potter series. I loved Fantastic Beasts. I was so excited about where this might go, and instead I've been left feeling disappointed and angry after watching it.

The first film was fun, it injected some much needed lightness to a dark wizarding world. It offered an amazing array of beasts, new characters, and a genuinely interesting opening into another huge event in the wizarding world. This film was dark, dreary, and filled with extras who looked like they'd been told to aim for the idea of wet cardboard.  Odd moments of fun and joy did creep in, (oh my god the bell toy) but it wasn't enough to remove the bitter taste of disappointment from my mouth as I exited the cinema.

Will I go and watch the next film? Probably. I'm still desperately hoping for that red herring, and for some salvaging of the story. This could have been something great, and maybe with the hindsight of the rest of the series this will fade into a slight blip. For now though, this will take some time before I feel less angry thinking about this film.