Books I'm Squeeing about in November

November is upon us, the month of Thanksgiving if you're in America, and desperately prepping for Christmas in the UK...

Christmas prep in our house means an awful lot of book buying, and these gorgeous books are just perfect for that!

Below are the books that I'm looking forward to getting sucked into this month, because with the night's getting darker, the only thing for it is to curl up with a blanket, a big hot chocolate and a massive stack of books... 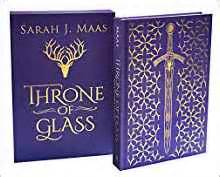 Throne of Glass by Sarah J Maas (collectors edition)
November 6th 2018
Throne of Glass begins the sweeping saga of assassin Celaena Sardothien, who is serving a life sentence in the mines of Endovier - until a young captain of the guard offers her a deal. She will have her freedom, on one condition: she must fight to win a deadly competition to serve as the champion of the king. The king who rules his kingdom with a cruel and merciless hand.

Live or die, Celaena will be free. Win or lose, her destiny will claim her.
Now available in this gorgeous new package, the Throne of Glass Collector's Edition features unique foil-stamped cover art, a ribbon marker, beautiful new interior page designs, colour endpapers and a new map of Erilea.
With the series finally reaching its epic conclusion, I'm sure I'm not the only one that will snaffle up any links to this world. Plus I'm a sucker for a pretty book with additional content. Now the real question is whether they'll release a collector's edition for every book in the series?... 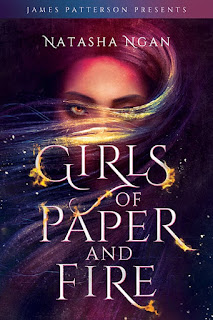 Girls of Paper and Fire by Natasha Ngan
November 6th 2018
Each year, eight beautiful girls are chosen as Paper Girls to serve the king. It's the highest honour they could hope for...and the most demeaning. This year, there's a ninth. And instead of paper, she's made of fire.

Lei is a member of the Paper caste, the lowest and most persecuted class of people in Ikhara. Ten years ago, her mother was snatched by the royal guards, and her fate remains unknown. Now, the guards are back and this time it's Lei they're after - the girl with the golden eyes, whose rumoured beauty has piqued the king's interest.
Over weeks of training in the opulent but oppressive palace, Lei and eight other girls learn the skills and charm that befit a king's consort. There, Lei does the unthinkable - she falls in love. Her forbidden romance becomes enmeshed with an explosive plot that threatens her world's entire way of life. Lei, still the wide-eyed country girl at heart, must decide how far she's willing to go for justice and revenge.
Basically I'm super intrigued - the cover, the blurb, the excited buzz that's been steadily growing over on bookstagram. Everything has aligned for this book to make me really excited, and I'm curious to read it. 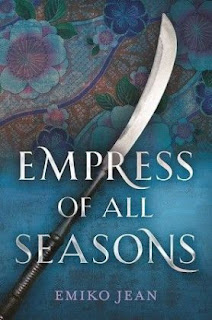 Empress of All Seasons by Emiko Jean
November 8th 2018
In a deadly tournament to become empress, any may enter but only one will survive, and one competitor doesn't just plan to win, she's going to steal the Emperor's fortune. . .

In each generation, a competition is held to find the next empress of Honoku. The rules are simple. Survive the palace's enchanted seasonal rooms. Conquer Winter, Spring, Summer and Fall, and you can marry the prince. All are eligible to compete - all except yokai, supernatural monsters and spirits whom the human emperor is determined to enslave and destroy.
Mari has spent a lifetime training to become empress. Winning should be easy. And it would be, if she weren't hiding a dangerous secret. Mari is a yokai with the ability to transform into a terrifying monster. If discovered, her life will be forfeit. As she struggles to keep her true identity hidden, Mari's fate collides with that of Taro, the prince who has no desire to inherit the imperial throne, and Akira, a half-human, half-yokai outcast.
Torn between duty and love, loyalty and betrayal, vengeance and forgiveness, the choices of Mari, Taro and Akira will decide the fate of Honoku.
Deadly tournament you say?! Sold to the excitable book dragon in the corner! Basically this blurb is everything and I will fight you for this book. 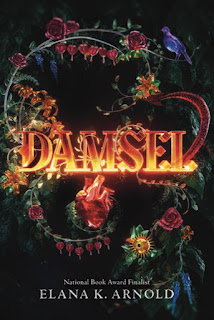 Damsel by Elana K Arnold
November 15th 2018
The rite has existed for as long as anyone can remember: When the king dies, his son the prince must venture out into the gray lands, slay a fierce dragon, and rescue a damsel to be his bride. This is the way things have always been.

When Ama wakes in the arms of Prince Emory, she knows none of this. She has no memory of what came before she was captured by the dragon or what horrors she faced in its lair. She knows only this handsome young man, the story he tells of her rescue, and her destiny of sitting on a throne beside him. It’s all like a dream, like something from a fairy tale.
As Ama follows Emory to the kingdom of Harding, however, she discovers that not all is as it seems. There is more to the legends of the dragons and the damsels than anyone knows, and the greatest threats may not be behind her, but around her, now, and closing in.
Subverting fairy tales and turning them on their head? Why yes I do happen to love that, how did you know?! Please let this one live up to that gorgeous cover and blurb, I needs it! 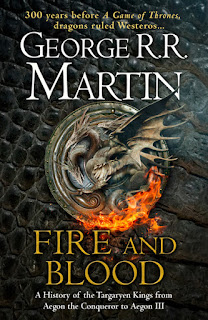 Set 300 years before the events in A Song of Ice and Fire, Fire and Blood is the definitive history of the Targaryens in Westeros as told by Archmaester Gyldayn, and chronicles the conquest that united the Seven Kingdoms under Targaryen rule through the Dance of the Dragons: the Targaryen civil war that nearly ended their dynasty forever.

The thrilling history of the Targaryens comes to life in this masterly work by the author of A Song of Ice and Fire, the inspiration for HBO’s Game of Thrones.
With all the fire and fury fans have come to expect from internationally best-selling author George R.R. Martin, this is the first volume of the definitive two-part history of the Targaryens in Westeros.
Centuries before the events of A Game of Thrones, House Targaryen – the only family of dragonlords to survive the Doom of Valyria – took up residence on Dragonstone. Fire and Blood begins their tale with the legendary Aegon the Conqueror, creator of the Iron Throne, and goes on to recount the generations of Targaryens who fought to hold that iconic seat, all the way up to the civil war that nearly tore their dynasty apart.
What really happened during the Dance of the Dragons? Why did it become so deadly to visit Valyria after the Doom? What is the origin of Daenerys’s three dragon eggs? These are but a few of the questions answered in this essential chronicle, as related by a learned maester of the Citadel and featuring more than eighty all-new black-and-white illustrations by artist Doug Wheatley. Readers have glimpsed small parts of this narrative in such volumes as The World of Ice & Fire but now, for the first time, the full tapestry of Targaryen history is revealed.
With all the scope and grandeur of Gibbon’s The History of the Decline and Fall of the Roman Empire, Fire and Blood is the ultimate game of thrones, giving readers a whole new appreciation for the dynamic, often bloody, and always fascinating history of Westeros.
There's nothing like some additional history to make me happy. The Targaryens are the most fascinating of the family houses in Westeros, so a book about them and to find out more about this incredible world is a dream come true. The bitter after taste of course is that it still isn't the Winds of Winter, but hopefully that will come soon... 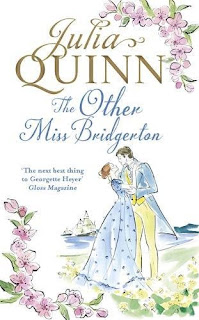 The Other Miss Bridgerton by Julia Quinn
November 20th 2018
She was in the wrong place...

Fiercely independent and adventurous, Poppy Bridgerton will only wed a suitor whose keen intellect and interests match her own. Sadly, none of the fools from her London season qualify. While visiting a friend on the Dorset coast, Poppy is pleasantly surprised to discover a smugglers' hideaway tucked inside a cave. But her delight turns to dismay when two pirates kidnap her and take her aboard a ship, leaving her bound and gagged on the captain's bed...
He found her at the wrong time...
Known to society as a rascal and reckless privateer, Captain Andrew James Rokesby actually transports essential goods and documents for the British government. Setting sail on a time-sensitive voyage to Portugal, he's stunned to find a woman waiting for him in his cabin. Surely, his imagination is getting the better of him. But no, she is very real-and his duty to the Crown means he's stuck with her.
Can two wrongs make the most perfect right?
When Andrew learns that she is a Bridgerton, he knows he will likely have to wed her to avert a scandal-though Poppy has no idea that he is the son of an earl and neighbor to her aristocratic cousins in Kent. On the high seas, their war of words soon gives way to an intoxicating passion. But when Andrew's secret is revealed, will his declaration of love be enough to capture her heart...?
Julia Quinn = chicken soup = happy Rosy. 'Nuff said. 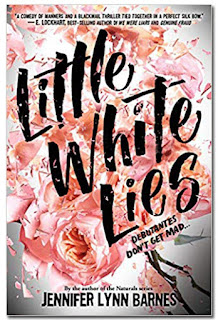 Little White Lies by Jennifer Lynn Barnes
November 23rd 2018
Eighteen-year-old auto mechanic Sawyer Taft did not expect her estranged grandmother to show up at her apartment door and offer her a six-figure contract to participate in debutante season. And she definitely never imagined she would accept. But when she realises that immersing herself in her grandmother's 'society' might mean discovering the answer to the biggest mystery of her life - her father's identity - she signs on the dotted line and braces herself for a year of makeovers, big dresses, bigger egos, and a whole lot of bless your heart. The one thing she doesn't expect to find is friendship, but as she's drawn into a group of debutantes with scandalous, dangerous secrets of their own, Sawyer quickly discovers that her family isn't the only mainstay of high society with skeletons in their closet. There are people in her grandmother's glittering world who are not what they appear, and no one wants Sawyer poking her nose into the past. As she navigates the twisted relationships between her new friends and their powerful parents, Sawyer's search for the truth about her own origins is just the beginning. Set in the world of debutante balls, grand estates and rolling green hills, Little White Lies combines a charming setting, a classic fish-out-of-water story, and the sort of layered mystery only author Jennifer Lynn Barnes can pull off.

If I have various kryptonites, debutante season is one of them. There's nothing quite like ball gowns, high society, and backstabbing to make me happy. Add in that this is by an author I love and it was an easy sell. Lynn Barnes has proven with her previous work that she writes pretty excellent mysteries, so I can't wait to start this one.

There are the books I'm excited about picking up this month, are there any that I've missed off the list that you think I should check out? Let me know in the comments below!
Posted by Rosy at 11:00