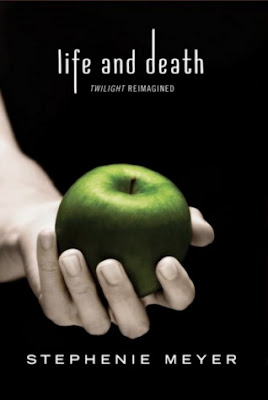 Celebrate the tenth anniversary of Twilight! This special double-feature book includes the classic novel, Twilight, and a bold and surprising reimagining, Life and Death, by Stephenie Meyer.
Packaged as an oversize, jacketed hardcover “flip book,” this edition features nearly 400 pages of new content as well as exquisite new back cover art. Readers will relish experiencing the deeply romantic and extraordinarily suspenseful love story of Bella and Edward through fresh eyes.

Sixteen year old me read ‘Twilight’ and loved it. I was swept away by the atmosphere and the forbidden love and the whole magical quality to the story. Now sixteen year old me didn’t have a huge amount of sense when it came to relationships and luckily I’ve grown up and realised just how unhealthy and terrifying the relationship between Edward and Bella really is, but I’ve never let go of the enjoyment and love I felt for this story when I first read it.
So it was a no brainer that I was going to read this re-imagined version when I heard about it, no matter what my logical brain might be screaming at me.

When Meyer says she’s gender swapped everyone apart from Charlie and Renee, she means everyone. Down to really bizarre things like the school nurse being an old man. There were moments like that where I really felt like she was taking it a bit far, as if she’s trying to make a point of ‘look how much re-writing I’ve done!’ rather than it serving an actual purpose to the story.

The gender swapped characters are a bit of a mixed bag. (Urgh, names, who would name their child Royal?!) On the one hand I was quite interested in Edythe – she’s still got all the creepy over possessiveness of Edward, but she’s not nearly as terrifying in her displays of anger which made me warm to her a little. However she’s juxtaposed against Beau, who I really did not get along with. I found him infinitely less interesting than Bella (which is saying something given how bland Bella has a tendency to be) and thoughts and actions which could be (sort of) forgiven with Bella came across as creepy and downright disturbing with Beau. Maybe Meyer cannot write un-alarming male characters, particularly not in this particular world, because almost all of her male characters in both this version and the original are terrifying. They’re possessive, angry, and have a tendency to be emotionally manipulative. Bella and Edwards’ relationship was a classic case of abuse, which is why it’s so alarming that a generation of teenagers grew up thinking that Edward and Bella had the perfect romance, and saying that they wanted to find their own Edward.

Whilst the gender swapped version manages to avoid some of the issues of the original it is still more than a little alarming in places, both with Edythe’s control issues and actions (still not over how creepy Edythe/Edward watching Beau/Bella sleep is) and Beau’s actions towards Edythe. This is the very definition of an unhealthy relationship with a whole heap of instalove thrown in for good measure, and a gender swap doesn’t change that.
In fact, gender swapping brings up a whole host of new issues. In ‘Twilight’ there were no real moments where Bella talked about Edward’s physicality. Not so with Beau who judges every woman/girl he meets by their physicality. Meyer seems to think that turning Bella into Beau means that because he’s a boy he must be more fixated on how girls look. Iffy at best, but when you start looking at the things he focuses on it becomes much more alarming. He fixates on how you can see the sharp angles of Edythe’ collar bones and shoulder blades. How you can count all her ribs through her t-shirt, and then waxes lyrical about how this is the epitome of attractiveness. Not even remotely ok.

In fact, aside from these blatant ‘look, I can totally write from a male perspective, look at these male thoughts!’ moments, Beau never actually feels like a guy. I kept forgetting that he was a guy (until there would be the inevitable reminder and it would jolt me into remembering again) and most of the story he was actually a she – which made for much more interesting reading to have a female/female relationship. Alas, the possibilities that could have given this story a much needed shake up.

If you were hoping that Meyer might provide an insightful and (much better) version of Twilight with this gender swapped version, you may as well not bother. The majority of the novel is just a find and replace on pronouns and names. The novel is still filled with problems – some the same as the original, a few delightful new ones brought to light with the swap. There are a few new scenes which hardcore fans will delight in reading, and there is of course the alternate ending which is essentially a hot mess of exposition and Meyer attempting to cram the three books of the quartet into fifty pages. In fact I found the alternate ending thoroughly depressing, fitting in quite nicely with the feeling of reading the rest of the novel.

It’s expensive, even on kindle, and if you buy the hardback you get a thoroughly unnecessary extra copy of Twilight so that the book becomes even more unwieldy. The entire thing smacks of being a money grab rather than what it’s pretending to be – a tribute to fans of a book that despite its problems helped to put Young Adult fiction on the map ten years ago.