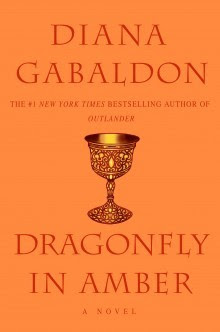 For twenty years Claire Randall has kept her secrets. But now she is returning with her grown daughter to Scotland’s majestic mist-shrouded hills. Here Claire plans to reveal a truth as stunning as the events that gave it birth: about the mystery of an ancient circle of standing stones… about a love that transcends the boundaries of time ... and about James Fraser, a Scottish warrior whose gallantry once drew a young Claire from the security of her century to the dangers of his....
Now a legacy of blood and desire will test her beautiful copper-haired daughter, Brianna, as Claire’s spellbinding journey of self-discovery continues in the intrigue-ridden Paris court of Charles Stuart ... in a race to thwart a doomed Highlands uprising ... and in a desperate fight to save both the child and the man she loves....

After starting the TV series for Outlander at the start of the year, I bought and devoured the first book in a matter of days. I then went on to buy the rest of the series, anticipating that I’d spend the next few weeks working my way through all of them.

However real life and other books intervened, so whilst I did start this book shortly after completing the first book, I then put it down again until last week when, on holiday to Scotland for a week, I decided that then was the time to get on and read it.

This delay was due to two things, the first being that it’s a large book and my blogging schedule makes it hard to sit down and work through a tome of this size with so many other books on my urgent to read pile. But it was also due to the start of the novel itself.

We finish Outlander with Claire pregnant and with Jamie in France, preparing to see if they can change the course of history. I expected this book to pick up where the first left off, so I was surprised and a little devastated to find that instead we open the book in Inverness in 1965. Claire is back in her own time, with a twenty year old daughter.

This time jump frustrated me for two reasons. One because it’s incredibly jarring to suddenly go forward and fill in the blanks of what happened before after quite a bit of exposition, and secondly because it destroys a lot of the tension. You know that Claire is going to leave Jamie and come back to her own time and you also know through simply looking at the timelines that Claire’s pregnancy at the end of the first book is going to end in tragedy. It does add a certain sense of foreboding to the novel, but it also leaves you waiting for the inevitable which removes the shock.

As a result the first half of the novel feels more like a waiting game than a thrilling second book in a series. If you aren’t interested in a slower moving historical novel then this will seem incredibly frustrating, but if like me you really enjoy the day to day bits of historical novels then you’ll love it. However I know that for a lot of people that jarring opening section, the slow paced meandering part set in Paris and the sudden introduction of a new perspective in the form of Roger Wakefield may be a little too frustrating and make you want to abandon the novel before you’re half way through.

However at the half way point things pick up. We return to Scotland, the plot kicks up several notches and history starts snowballing in a most alarming fashion until you’re left gasping and reeling in the final act. Dragonfly in Amber suddenly finds its footing and returns to the roots that Outlander fans fell in love with and as a result it shines.

Upon the conclusion of her story of the past, we then return to the present of 1965 where things continue apace as some events come full circle and new surprises will leave you gasping. The second half of the novel is beautifully constructed and more than made up for the sometimes slower sections in the first half.

I loved this novel for a lot of the same reasons as I loved the first, but also whole new ones. We see a whole raft of familiar faces in one way or another, something I hadn’t been expecting with the shift to France, but something I absolutely adored. We also get to see a lot more of the world with the shift to France, particularly Paris, as well as Edinburgh and more of the Highlands. Since I was reading this book whilst in Edinburgh those sections were particularly wonderful because Diana Gabaldon excels at research and bringing her stories to life in the most realistic and wonderful ways.

Whilst the Paris sections may frustrate some, I loved them. I loved the detail, the glimpses not only of life at court but also in the city. The gossip, the scandal, the fashion. There’s less of the uncertainty of the first novel and more of Claire embracing this life she’s been thrown into, and that is a wonderful sight to behold. There is less of the uncertainty and determination to escape and so Claire feels more grounded and settled than she did in the first book, allowing the reader to take their time exploring the new surroundings rather than be in a constant state of will she/won’t she escape back to her own time.

It also explores new depths to the relationship between Claire and Jamie. I loved watching the two of them discover their feelings for the other and build their relationship in the first book, so to watch those feelings deepen and evolve over the course of this book is truly wonderful, and really cements their status as one of my favourite fictional relationships.

So if you read and loved Outlander, this book is a must read. Be warned about the slightly jarring opening section and slow first half, but know that the second half more than makes up for any frustrations you may find in the first. It has everything readers loved about the first book and builds it into a truly gripping tale, one that cements the series as a classic of fantastic storytelling.