Review: Every Move by Ellie Marney 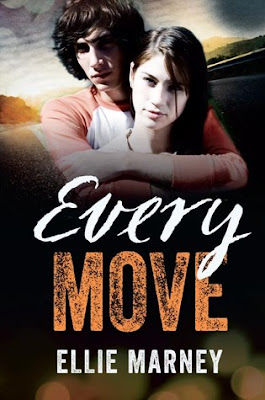 Be warned for very mild/vague spoilers for the book. Nothing specific and nothing that will ruin the book.

The sequel to Every Breath and Every Word. After the dramatic events of London, a road trip back to her old home in Five Mile sounds good (in theory) to Rachel Watts, with her brother Mike in the driving seat. But when Mike picks up his old buddy – the wildly unreliable Harris Derwent – things start to go south. Back in Melbourne, Rachel’s ‘partner in crime’, James Mycroft, clashes with Harris, and then a series of murders suggest that the mysterious Mr Wild – Mycroft’s own personal Moriarty – is hot on their tail. When tragedy strikes, Rachel and Mycroft realise they’ll have to recruit Harris and take matters into their own hands…

I adored the first book in this series so much that it made me nervous to read the second one, just in case it didn’t live up to my expectations. However when I read the second one a couple of weeks ago it more than lived up to the high standards set and left me with none of the reservations I’d had about launching straight into the third and final book of the trilogy. Sadly, I really wish it had.

There is an awful lot to love in the conclusion to this thrilling series, but unfortunately there were quite a few elements that really didn’t work for me. One of the things I loved so much about the first two books is that Mycroft and Rache never exceed the limitations around them being teenagers and having limited resources/power. Adults got involved in the situations where necessary and I loved that extra element of realism that is so often missing from YA crime fiction. Not so in this book. Suddenly our heroes find themselves in utterly ridiculous situations and insane stand offs that jarred me and felt thoroughly unrealistic and left me thoroughly frustrated.

I could probably forgive that were it not for the two other big issues that marred the enjoyment. Firstly a love triangle is introduced. For no reason. With no real build up or explanation and Rachel suddenly starts acting completely out of character and flirting back with this new guy. I get that she’s having problems with Mycroft following the events of the second book, and I get that she’s suffering from PTSD, but this seemed so thoroughly out of the blue, out of character and completely ridiculous. I frequently found myself frustrated with Rachel’s sudden obsession with the new boy and it didn’t make any real sense.

Then the third frustration, and this was enough to make me put the book down and walk away for a few days. I wasn’t sure if I was actually going to pick it up again and finish it.
Mycroft and Rachel work out who the big bad is, but then instead of being logical or even remotely like their usual coherent selves, Rachel fires off an angry email telling the person that they know who they, everything they’ve done and she and Mycroft have all the evidence they need.

Not even a remotely good idea, and it sets off the truly awful chain of events that topples down in the second half of the book. Now yes ok, I get that Rachel is angry and hurt and stressed and upset and has had enough of being terrified because of other people. But come on SOME COMMON SENSE PLEASE. It is a completely out of character move that puts everyone in danger and for NO REASON AT ALL.

It was just so frustrating and ridiculous and not like Rachel at all. Add to that the problems with the love triangle and some highly suss behaviour on Rachel’s part and my love for her was basically in shreds by the end of the book.

A lot of the elements I loved about the first two books were still there – good writing, fast paced plot that kept me on the edge of my seat. I also loved seeing Rachel’s PTSD tackled, although it felt a little like a couple of hugs and it went away which was also frustrating.

However all the love I felt for those things was horribly over shadowed by the problems I’ve outlined above. I adored this series, I fell in love with these characters, I swooned over them, I cried over them, I stayed up all night reading their nail biting stories, and this final instalment felt like a complete let down after that.

By all means go and see the brilliance of the first two books, but be warned going into this one that it has quite a few problems by comparison and might leave you wishing that you’d stopped after book two.