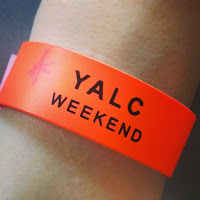 One thousand two hundred and twelve miles is quite a large round trip, but when it comes to the Young Adult Literature Convention, no distance is too great to make sure I was there.

I'm now back in insanely hot Lyon (the brief respite to English weather has completely wrecked any sort of tolerance for the heat that I'd built up...) and feeling the come down that only happens when you've been looking forward to something for so long, and had such a fantastic time during it. In short, YALC was fab.

It was a much larger area than last year, taking up three quarters of the second floor of the Olympia (the last quarter was filled with the gaming section) and split up so there were partitioned off areas for the panels, workshops and agents corner. As well as lots of publishers stalls, and reading and signing areas. It all felt much more spaced out (which was definitely a good thing on the Saturday when it got really busy!) and offered plenty of space for everyone to join in with anything they chose to.

The panels were in turn hilarious and thought provoking, the workshops interesting, the plethora of authors and bloggers and book lovers thoroughly overwhelming and brilliant. To be surrounded by so many people who genuinely love books is always a thrilling experience, and it was wonderful to share book recs and get excited about authors.


And the authors! So many incredible authors were in attendance, both for panels/signings/workshops and just because they loved books. There were plenty of star struck moments for me! It was also awesome to hear more from authors that I didn't know well or hadn't yet come across and to get excited for books that hadn't piqued my interest before. I have such a long list of books that I cannot wait to read as a result of this weekend.

Standout authors were (of course) Sarah Rees Brennan, you made my weekend with your spoilers about Angela and Holly and chatting about how nice guys don't finish at all, they end up on a stone slab...
So lovely to meet the wonderful Moira Fowley-Doyle after shrieking about how brilliant 'The Accident Season' is to EVERYONE who will listen. And Marie Rutkoski, after my binge read of the first two books in the Winner's Series earlier this year. Also Non Pratt, casually selling books on the Waterstones stand and signing my copy of Remix was a surreal and brilliant end to the weekend. Making an utter idiot of myself in front of Alexia Casale when confusing her with Laura Dockrill on the first day after three hours sleep and a whole heap of jetlag... Meeting Marieke Nijkamp whose novel 'This is Where it Ends' is next up on my kindle and I cannot wait to read. And Sarah Benwell who valiantly made it through half of the weekend whilst insanely ill, surviving on cups of tea and book love.
It was the kind of weekend where you end up in turns star struck and then having a perfectly normal conversation with authors whose work you have loved and admired - the very best kind of weekend.


Then there were the bloggers! So many awesome bloggers and not enough time to spend with each of you! Sophie from 'So Many Books, So Little Time', Michelle from 'The Book Club Forum/Sitting on a Cornflake', Faye from 'A Daydreamer's Thoughts', Sally from 'The Dark Dictator', Viv from 'Serendipity Reviews', Hannah from 'Luna's Little Library', Daphne from 'Winged Reviews', Virginie from 'La Chouett', Michelle from 'Tales of Yesterday' and the awesome Mara who has impeccable taste in books!
Plus so many others who really helped make the weekend something extraordinary.

It was fantastic to have a mini Bookish Brits gathering and to see Michelle, Andrew and Julianne. It's not the same seeing you on youtube and it was fantastic to meet up, film, take pictures and generally get bookishly excited. Also huge congrats to Andrew on not throwing up in his shoes and doing a wonderful panel, Book Blogging for Beginners on Sunday!

And of course, the most important person this weekend for me was the awesome Laurie who let me steal half the duvet, kept me in coffee, and kept me (in)sane when the sleep deprivation became too much. Mooching around getting excited about books, going to signings and panels, and sneaking downstairs to get excited about funkopops and cosplay made this weekend a truly spectacular affair.

YALC is still a very young endeavour, and for an event only in its second year it's a fantastic achievement. However it's obvious that with the level of popularity and support it's gaining that it's going to be something that continues to evolve and grow, and here are four things that I would love to see happen at the next YALC. 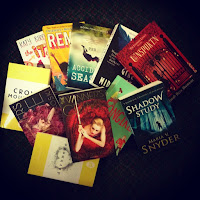 If you weren't able to make it, then don't forget to look out for all the videos going up on the Bookish Brits youtube channel. (Mine will be up on Friday!) Also check out my twitter, as I was live tweeting every panel I went to:
Apocalypse Now Panel
Shadowhunters Panel
Bringing Sexy Back Panel
Between Fantasy & Reality Panel
Troubled Teens Panel
LGBT in YA Panel
Plus my instagram (#RosyGoestoYALC) for pictures of the panels, some authors, books and bloggers!
But for now, it's time to nap, read all the awesome books I picked up, and start counting down the days until the next YALC. I hope to see as many of you as possible there next year!
Posted by Rosy at 09:00