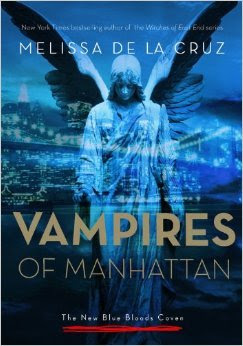 The Vampires of Manhattan is "hipster horror"--the memorable characters from her Blue Bloods series are older and cooler than before, trying to build "Millennial" lives in the bustle of Manhattan while battling forces of evil and, of course, each other.
Hero of this sexy, paranormal action tale is Oliver Hazard-Perry, former human conduit, and Manhattan's only human-turned-vampire, now the head of the Blue Bloods Coven. When his all-too-human lover is found murdered on the eve of the coven's annual Four Hundred Ball--a celebration meant to usher in a new era in vampire society, and to mark the re-unification of the Coven after decades of unrest and decay--Oliver is devastated.
Now, not only is he trying to create a new world order for the immortal elite, he's the prime suspect and is stalked by the newly installed head of the vampire secret police. Because according to the new rules, vampires who take human life can now be executed. Burned.
How can an immortal sentenced to die fight back? He has to find the killer--and the answers lie deep in vampire lore.

Who wrote this blurb? Where they drunk? Had they even read the book? Because when I re-read the blurb after reading the book I did a double take. This blurb has very little to do with the actual book, because the book this blurb is describing (apart from the use of the phrase ‘hipster horror’ which should never ever be used again) actually sounds kinda interesting. Whereas what I actually read really wasn’t.

Back when I was but a young vampire book reading teen, I really enjoyed the first couple of Blue Bloods novels, but the library never had any more than the first two and my monies didn’t stretch to buying all of them, so I drifted away from the series and kept promising that one day I’d go back and read them properly. In the meantime I read some of Melissa’s other novels and really enjoyed them, so when this one came up and professed to be a new series I figured it looked interesting and I stood a chance of knowing what was going on if it was a new series.
Don’t be fooled.

There were lots of things that weren’t explained that I’m assuming I would understand better had I read the previous Blue Bloods series, and there were things being explained in such minute detail that I imagine it would have been seriously frustrating for anyone who had read the previous novels – it was getting frustrating for me and they were supposed to be helping me out. It didn’t strike the right balance between harking back to the previous series whilst standing on its own two feet as a whole new animal. It leaned far too heavily on the previous series and the knowledge you’d have from reading that and as a result it really didn’t earn the label of a new series in its own right.

The characters really weren’t that interesting, they didn’t grab my attention, I wasn’t invested in any of them and I didn’t get caught up in their stories. The whole mystery at the books centre was a bit of a farce. If you’re going to have a murder mystery you have to set it up with clues throughout, not just go for the big reveal at the end and go ‘tada! It was this person all along!’ without the appropriate build up. Sure there were a few hints, but not nearly enough to create a substantial case for the culprit, and that’s incredibly frustrating to read.

The pacing was good for the most part. It was a bit all over the place with present day then skipping back six months in the middle of the novel and then coming back to the present again. It helped to fill in a few of the blanks, but it didn’t really give enough of a payoff for it to really feel worth it. I found the murder mystery plot to be the most engaging of all of them. The rest of the story threads felt like privileged people whinging – never a particularly good storyline – and people in their late twenties complaining about how over the hill they were and old and stodgy. They didn’t talk or feel like real people. The writing seemed to oscilate between good and downright terrible.

"He’d been a skinny human teenager, but he was almost thirty years old now, and to put it bluntly, he was ripped."

I mean who talks like that? What even is this? My eyes. I wanted to love it, I really did, but it’s been badly managed with the blurb and marketing it as New Adult – they’re all thirty, you’re hardly a new adult by that age. Plus trying to sell it as a new series, when really you don’t stand much of a hope unless you’ve already read all of the previous Blue Bloods books.

All in all this was a quick but ultimately disappointing read, which has put me off going back to the Blue Bloods series. Maybe in a few years I’ll try the original series again, but I’ll be steering well clear of any more of the New Blue Bloods Coven.