Review: Silver in the Blood by Jessica Day George 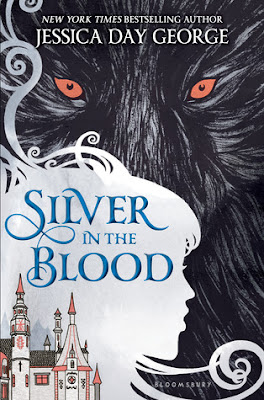 Society girls from New York City circa 1890, Dacia and Lou never desired to know more about their lineage, instead preferring to gossip about the mysterious Romanian family that they barely knew. But upon turning seventeen, the girls must return to their homeland to meet their relatives, find proper husbands, and—most terrifyingly—learn the deep family secrets of The Claw, The Wing, and The Smoke. The Florescus, after all, are shape-shifters, and it is time for Dacia and Lou to fulfill the prophecy that demands their acceptance of this fate… Or fight against this cruel inheritance with all their might.
With a gorgeous Romanian setting, stunning Parisian gowns, and dark brooding young men, readers will be swept up by this epic adventure of two girls in a battle for their lives.

I was all set to get along famously with this book, after all I’ve enjoyed Jessica Day George’s books in the past, it’s got an historical setting, plus shapeshifting society ladies! What more could one want! However it ended up being quite a problematic book, so whilst by the time I reached the final page I had quite enjoyed the story, I was left with a bitter taste in my mouth.

The first half of the story drags, like at a seriously glacial pace. If you’re going to reveal something to the reader in the blurb, don’t then drag out the reveal to the heroines for half of the book. It does not inspire tension or mystery, it just peeves the reader to no end because they know what’s going on and there is no reason for everyone to be acting so ridiculously mysteriously all the time.

Then you’re faced with the sheer un-likeability of all of the adult characters. They flip from vaguely likeable right at the start to downright nasty within a few chapters, and with no reason. None of the motivations make any sort of sense with the adults, and I refuse to believe that previously caring parents and parental figures would cease to care about their children like that.

But the most problematic thing for me, the point from which this book didn’t stand a hope of recovery was where Mihai threatens to and attempts to rape Dacia. It was handled so badly, and Dacia’s response to it was dealt with appallingly. Mihai himself was a very poorly constructed character, he made little to no sense and his motivations were bizarre. His actions where he starts trying to force himself on Dacia didn’t fit with the rest of his character, and seemed so utterly out of place. Add into that that we don’t get to understand any of Dacia’s thought process or feelings after the event and the whole storyline ended up feeling like a bit of a train wreck and left me feeling thoroughly put off the story.

The two girls were interesting, and I enjoyed the alternating chapters headed by diary entries, letters and telegrams. It gave little additional insights into the characters and the story and were a lovely touch. However the character development was poor. Dacia was unlikeable for the first half, then she suffers a huge trauma through the knowledge of her shapeshifting, followed by the near rape and basically shuts down. But instead of understanding what’s happened and being able to deal with her trauma or allowing the reader into her thought process, she’s quiet and withdrawn before suddenly poof she’s decided she’s all fixed. I’m sorry but trauma doesn’t work like that, and the way that storyline was dealt with was shocking.

Then Lou is a timid and mostly unmemorable girl until poof suddenly she’s decided everything is peachy and she’s going to stop acting like a doormat. I get that they both had a huge shift through their experiences and this is what led to their changes in attitude, but we aren’t really allowed into their characters enough that we can understand and experience that shift in emotions. We’re just told ‘hey look this has changed’ and expected to get on board with it.

And the ‘heroes’ – what kind of hero, or even father or uncle, leaves these girls in a situation they know is that bad? Where was the reasoning behind this? None of the character motivations or reasoning made sense and it made my head hurt to try and make it make sense.

So whilst I was excited after reading Jessica Day George’s previous novels, this one really didn’t work for me. The pacing was off, the character arcs didn’t work particularly well and that attempted rape was the proverbial death knell for any sort of enjoyment. The second half of the book is infinitely better paced and more interesting than the first half, but unfortunately it was too little far too late.