Review: A Kiss at Midnight by Eloisa James 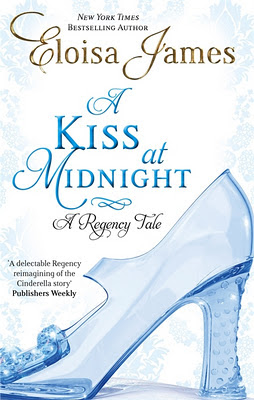 Miss Kate Daltry doesn't believe in fairy tales . . . or happily ever after.
Forced by her stepmother to attend a ball, Kate meets a prince . . . and decides he's anything but charming. A clash of wits and wills ensues, but they both know their irresistible attraction will lead nowhere. For Gabriel is promised to another woman—a princess whose hand in marriage will fulfil his ruthless ambitions.
Gabriel likes his fiancée, which is a welcome turn of events, but he doesn't love her. Obviously, he should be wooing his bride-to-be, not the witty, impoverished beauty who refuses to fawn over him.
Godmothers and glass slippers notwithstanding, this is one fairy tale in which destiny conspires to destroy any chance that Kate and Gabriel might have a happily ever after.
Unless a prince throws away everything that makes him noble . . .
Unless a dowry of an unruly heart trumps a fortune . . .
Unless one kiss at the stroke of midnight changes everything.
Oh my word. Eloisa James knows romance – there is no doubt about that. And when I’m not feeling well and it’s snowing outside, the only thing I want to read is some romance that makes my insides go all warm and mushy and has me laughing out loud and gasping and sighing in all the right places, and this – the first in Eloisa’s ‘happily ever after’ series – ticks all the right boxes.
The thing about romance is that you know that everything is going to work out ok in the end. There will be obstacles (otherwise it’s just boring) there will be misunderstandings (naturally) but after all that, there will always be a happily ever after. That’s what has me coming back to romance time and time again. Partly to reassure me that there are men like Gabriel out there in the world. I’m happy with just the man, never mind the fact that he’s a Prince. But also because I know that the right people are always going to end up together – no matter how bleak it may seem at times.
And there’s something so delicious about having a fairy tale re-told just right. Take the film ‘Everafter’ for example. If you haven’t seen it yet, go forth and watch, it’s beautiful. And ‘A Kiss at Midnight’ gave me a similar feeling inside. It was funny – there is no other romance writer I know who can write smart witty dialogue between a sparring hero and heroine like Eloisa James. It had just the right amount of fairy tale without being over the top. And it had enough emotional flips and turns that had me desperately tearing through the pages to see how it all turned out. See, even though I knew it would be a happy ending, Eloisa James has created a tale that is so engaging and immersing that you have to keep reading just to make sure. That you want to keep reading.
There are balls and flirting, and brilliant dialogue, and fairy godmothers and rats galore. And Prince’s rescuing girls from lakes, and doing unspeakable things in mazes, and fabulous brothers who know just when to help and just when to thump you. It’s brilliant.
My only complaint was that the language was not up to Eloisa’s usually impeccably flawless standard. It peeves me when characters don’t talk how they would have done in that particular time period. However Eloisa does acknowledge that she’s taken liberties with the language and points out that this isn’t just a tale set in Regency England – it’s a fairy tale, and as such is allowed some leeway. At which point I forgave her any of my grumbles.
However, despite the fact that this is a retelling of Cinderella, it is still an entirely fresh tale in its own right. Victoria is such a lovely step sister that I was almost sad that I didn’t get to see more of her throughout the book. In fact it was the family relationships that almost stole the show. I loved seeing Kate and Henry interact, Kate and Victoria – but also Gabriel and Wick. Oh I want a story about Wick now please! And Gabriel’s responsibility to his family – extended and close. I loved that every character is both the perfect fairy tale creation, but at the same time completely human and flawed – and torn between what they want and what they need. It has just enough reality to keep it grounded, and the rest is pure fairy tale brilliance.
And of course no romance book would be complete without a bit of seduction. I warn you it is not for those easily offended, because Kate’s seduction is both thrilling and complete, and lengthy. Many, many gorgeous moments between her and Gabriel litter the book, and I looked forward to each of their encounters, partly to see Gabriel start to accept his feelings, and to see Kate come into her own. I loved her, every unladylike moment, and every glorious kiss. It was perfection.

For fans of Eloisa James check back later in the month when I will not only be asking the lady herself a couple of questions about her upcoming novels and her writing, but will be hosting a giveaway for a signed Eloisa James novel!
Posted by Rosy at 15:25