Review: The Book of Blood and Shadow by Robin Wasserman 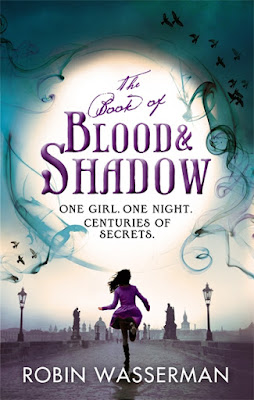 It was like a nightmare, but there was no waking up.  When the night began, Nora had two best friends and an embarrassingly storybook one true love.  When it ended, she had nothing but blood on her hands and an echoing scream that stopped only when the tranquilizers pierced her veins and left her in the merciful dark.
But the next morning, it was all still true: Chris was dead.  His girlfriend Adriane, Nora's best friend, was catatonic. And Max, Nora's sweet, smart, soft-spoken Prince Charming, was gone. He was also—according to the police, according to her parents, according to everyone—a murderer.
Desperate to prove his innocence, Nora follows the trail of blood, no matter where it leads. It ultimately brings her to the ancient streets of Prague, where she is drawn into a dark web of secret societies and shadowy conspirators, all driven by a mad desire to possess something that might not even exist. For buried in a centuries-old manuscript is the secret to ultimate knowledge and communion with the divine; it is said that he who controls the Lumen Dei controls the world. Unbeknownst to her, Nora now holds the crucial key to unlocking its secrets. Her night of blood is just one piece in a puzzle that spans continents and centuries. Solving it may be the only way she can save her own life.

This book had everything that meant I should have been falling at its feet and declaring my undying love – yet we really didn’t click.
I really wanted to, and I really should have done, because it’s a brilliant plot, and fabulous writing, but something really didn’t work for me personally, and I’m not quite sure what it was.

The plot itself is a fabulously fresh idea that takes you from the safe confines of translation as an extra curricular activity, and transports you to the dangerous streets of Prague where truly terrifying danger lurks around every corner.

Nora was an interesting character, for the most part I liked her, she was sensible and intelligent, although a little prone to ignoring the obvious because she didn’t want to see it – although we’re all guilty of that sometimes. She goes through so much and I really willed her to get through it relatively intact. I did find sometimes that it was a little bleak, that there were moments where she acted as though there was no home, no life, nothing to live for, and it kind of made me want to throw myself off the nearest bridge, so it’s a miracle she didn’t!

I adored Eli, he was by far my favourite character in the book. He was smart, funny, and made me read so much faster whenever he was around. He made the book interesting for me, and made me want to find out what was going to happen next.

I never really warmed to either Max or Adrianne – which perhaps goes some way to explaining my overall lack of enthusiasm. They felt transparent to me, and as a result I wanted Nora to pitch them into the nearest river and go off with Eli.

Whilst I liked the writing and the voice, I found the short chapters and jumping moments of reflection quite disorientating. As a result it took me a while to get into the book and to figure out where we were, what was happening, and whether anyone was dead yet.

It was also quite a slow build, taking until way into the Prague section for me to really spark an interest. I think that this was in part due to the Elizabeth letters. Whilst I loved the idea I found the constant slipping into Elizabeth’s world (at least at the start) to be even more slowing than the original plot. Whilst both worlds and scenario’s needed to be set up, trying to do so simultaneously meant that I got bored. I found myself becoming frustrated with Elizabeth’s parts whereas I should have found them fascinating as they set up the rest of the plot.

I found myself putting the book down and not really feeling compelled to pick it up again and find out what happens. And where there should have been thrills, twists and shocks I had already worked out they were going to happen a while before, so there wasn’t any compulsion to continue on that side either. I’m going to give it a while and then try re-reading because I think it might have just been a bad time to pick it up. Let’s hope the re-read goes better!

As a result, my honest opinion of the book on this read through is three stars – however I know this is my personal rating and was because I didn’t happen to get on well with it this time around. If I had I would have given it four.